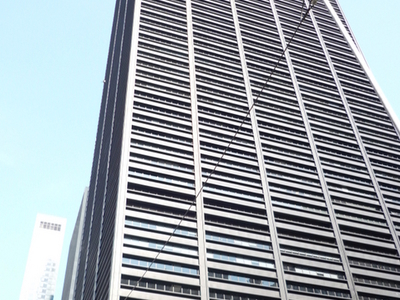 One Liberty Plaza, formerly the U.S. Steel Building, is a skyscraper in Lower Manhattan, in New York City, at the location of the former Singer Building (tallest structure ever dismantled) and the former City Investing Building. One Liberty Plaza is currently owned and operated by Brookfield Office Properties. The building is 743 ft (226 m) tall and has 54 floors. It was completed in 1973. At 2,200,000 sq ft (200,000 sq m), each floor offers almost 1 acre (0.40 ha) of office space, making it one of the largest office buildings in New York.

Its facade is black, consisting of a structural steel frame. The building was originally commissioned by U.S. Steel. It once housed the headquarters of Merrill Lynch. Currently, a variety of tenants occupy the space, from large law firms, such as Cleary Gottlieb Steen & Hamilton, to public and not-for-profit agencies like the Lower Manhattan Development Corporation and the World Trade Center Memorial Foundation as well as new businesses such as Startup Institute. The building is bordered by Broadway, Cortlandt Street, Church Street, and Liberty Street. South of the building is Zucotti Park, formerly called Liberty Plaza Park.

Here's the our members favorite photos of "Skyscrapers near Lower Manhattan". Upload your photo of One Liberty Plaza!

Going to One Liberty Plaza? Get answers from our friendly locals