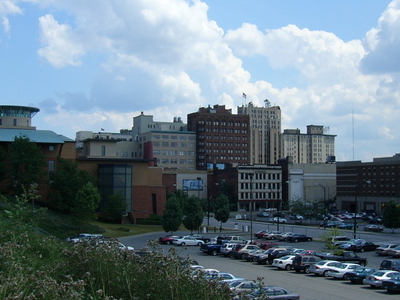 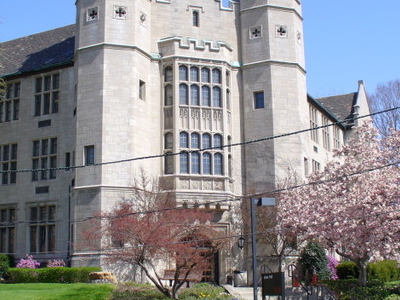 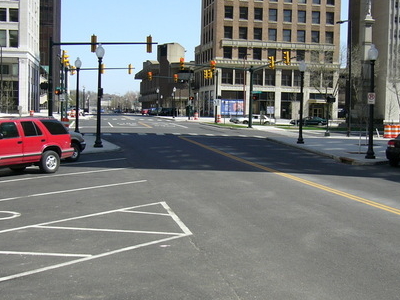 Youngstown is a city in the US state of Ohio and the county seat of Mahoning County; it also extends into Trumbull County. The municipality is situated on the Mahoning River, approximately 65 miles (105 km) southeast of Cleveland and 61 miles (100 km) northwest of Pittsburgh, Pennsylvania. Youngstown has its own metropolitan area, but is often included in commercial and cultural depictions of the Pittsburgh Tri-State area and Greater Cleveland. Youngstown lies 10 miles (16 km) west of the Pennsylvania state line, midway between New York City and Chicago via Interstate 80.

The city was named for John Young, an early settler from Whitestown, New York, who established the community's first sawmill and gristmill. Youngstown is located in a region of the United States that is often referred to as the Rust Belt. Traditionally known as a center of steel production, Youngstown was forced to redefine itself when the U.S. steel industry fell into decline in the 1970s, leaving communities throughout the region without major industry. Youngstown also falls within the Appalachian Ohio region, situated amongst the foothills of the Appalachian Mountains. The 2010 census showed that Youngstown had a total population of 66,982, making it Ohio's ninth largest city.

Attractions:
Forbes.com recently ranked Youngstown, Ohio 4th among the best cities in the U.S. for raising a family. The article included the city's schools, current low crime, cost-of-living, and property rates in its decision.

Covelli Centre:
Despite the impact of regional economic decline, Youngstown offers an array of cultural and recreational resources. Moreover, the community's range of attractions has increased in recent years. The newest addition is the Covelli Centre, a venue for Tier I Jr. A hockey games, concerts, "on ice" shows, and other forms of entertainment.

Theater:
The community's culture center is Powers Auditorium, a former Warner Brothers movie palace that serves as the area's primary Music Hall while providing a home for the Youngstown Symphony Orchestra. This downtown landmark is one of five auditoriums located within the city limits. Ford Recital Hall was built in 2006 as an addition to newly renovated Powers Auditorium. Imposing and neo-classical Stambaugh Auditorium, located on the city's north side, has served for decades as a site of concerts and is often rented for private events. The facility also hosts the Stambaugh Youth Concert Band.

Oakland Center for the Arts, located in the downtown area, is a venue for locally produced plays. This institution is complemented by the Youngstown Playhouse, which is located on the city's south side. The Youngstown Playhouse, Mahoning County's primary community theater, has served the area for more than 80 years, despite intermittent financial problems. Well known theatrical personalities from the Youngstown area include comedic actor Joe Flynn, screen actress Elizabeth Hartman, singer and Broadway performer Maureen McGovern, and television and screen actor Ed O'Neill.

Museums:
The Butler Institute of American Art is located on the northeastern edge of the Youngstown State University campus. This institution was established by industrialist Joseph G. Butler, Jr., in 1919 as the first museum in the country dedicated to American art. Across the street from the Butler Institute stands the McDonough Museum of Art, YSU's University Art Museum and the Mahoning Valley's center for contemporary art. The McDonough, established in 1991, features regular changing exhibitions by regional, national and international artists and provides public access to the work of students, faculty and alumni from the Department of Art. The Clarence R. Smith Mineral Museum, also located on the YSU campus, is operated by the university's geology department and housed in a campus building.

Here's the our members favorite photos of "Cities in Ohio". Upload your photo of Youngstown!

Going to Youngstown? Get answers from our friendly locals