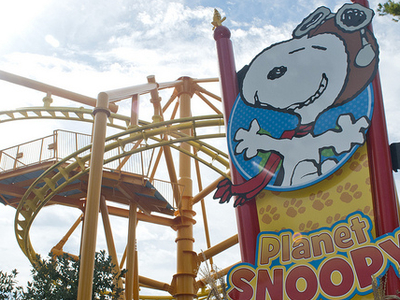 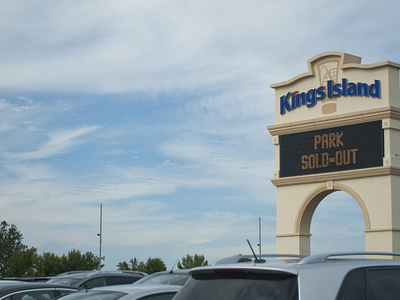 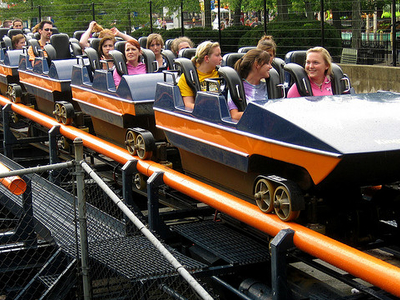 Kings Island is a 364-acre (147 ha) amusement park located 24 miles (39 km) northeast of Cincinnati in Mason, Ohio. It is owned and operated by Cedar Fair Entertainment Company. The park was opened in 1972 by the Taft Broadcasting Company and after more than $275 million in capital investments, the park features over 80 rides, shows and attractions including 13 roller coasters and a 33-acre (13 ha) water park. Kings Island has won Amusement Today's Golden Ticket Award for having the "Best Kids' Area" in the World for thirteen consecutive years (2001–2013). Kings Island operates from mid-April through Labor Day.

The park reopens several weeks later for Halloween-themed events held every weekend through the end of October or early November. As of 2012, Kings Island is the second most visited seasonal amusement park in the U.S. behind Cedar Point. It had an estimated 3.21 million visitors in 2012. The two parks are second (Cedar Point) and third (Kings Island) overall for seasonal attendance in North America behind Canada's Wonderland.

Paramount's Kings Island (1992–2006)
In 1992, Paramount Communications Inc. (formerly Gulf+Western) purchased Kings Island and the rest of KECO's parks for $400 million. Paramount formed a new division known as Paramount Parks. They bought out the remaining 80% stake in Canada's Wonderland in 1993, raising the number of parks to five. That same year, Paramount Parks began incorporating themes from its movies into the park. Viacom entered the picture after acquiring Paramount in 1994, paving the way for the appearance of Nickelodeon themes. First was Nickelodeon Splat City, followed by Nickelodeon Central and eventually Nickelodeon Universe.

In 1997, a year after leaving Deerfield Township, the city of Mason annexed most of Kings Island. A temporary measure allowed for some land to remain in Deerfield in an attempt to appease park officials and reduce the impact on the township. The rest would be annexed in 1999. On June 14, 2005, Viacom announced intentions to split into two companies (Viacom and CBS Corporation) with CBS inheriting Paramount Parks. Seven months later, on January 26, 2006, CBS announced that the theme parks were for sale.

In late 2009, the Mason City Council decided to put a measure on its 2010 ballot that would mandate a 3-percent ticket tax and a 5-percent parking tax at both Kings Island and The Beach waterpark. Council member Tony Bradburn argued that it was necessary for the city to help pay for infrastructure improvements, as well as cover police and fire expenses. This proposed tax hike was the center of debate for several months. Kings Island actively encouraged the public to write, email and call Mason City Council representatives to express opposition. On February 8, 2010, the Mason City Council voted 5–1 against the measure.

Park Attractions
Action Zone: Action Zone opened in 1974 as Lion Country Safari, a 100-acre (40 ha) section of the park featuring a monorail ride that took guests on a safari-style tour through an animal preservation. The area later became known as Wild Animal Habitat. It featured rides such as Screamin' Demon, an early steel looping roller coaster from Arrow Development added in 1977, and King Cobra, the world's first stand-up looping roller coaster unveiled in 1984.

Coney Mall: When Kings Island opened in 1972, a section of the park was dedicated to its predecessor, Coney Island. The area was constructed to resemble the former park and featured many flat rides that moved to the new park. Originally called Coney Island, it was later renamed Old Coney in 1980. In 1986, the area was renamed Coney Mall. In addition to rides, the carnival-themed area features game booths, arcades and concession stands reminiscent of state fairs and traveling carnivals from the early twentieth century. Coney Mall has five roller coasters, one thrill ride and five family rides.

X-Base: This sub-area opened in 2007. Flight of Fear had existed previously, but with the addition of Firehawk, the area took on its own theme, centered around flight and propulsion. Although the area is designated by a sign, it is not listed on the park map and is officially part of Coney Mall.

International Street: International Street is the first themed area to greet guests entering the park. It was one of the park's original staples in 1972. Through its architecture, the area represents the cultures of Italy, Spain, France, Germany and Sweden. It has restaurants, souvenir shops, the Royal Fountain with light and water shows and a one-third-scale replica of the Eiffel Tower. The area features three family rides.

Oktoberfest: Oktoberfest, relating to the eponymous German festival, opened with the park in 1972. The area resembles a German town with timber-framed German-style architecture. The Festhaus is the central attraction, featuring live shows with several indoor eateries. A full-service bar is located atop a portion of Oktoberfest lake. Rides include one roller coaster, one thrill ride and one family ride.

Planet Snoopy: The area initially opened with the park in 1972 as The Happy Land of Hanna-Barbera and was later shortened to Hanna-Barbera Land. The upper part that borders Rivertown saw the addition of a kids' play area, stage and water attraction in 1995 and was renamed Nickelodeon Splat City. In 2001, Kings Mills Log Flume became The Wild Thornberrys River Adventure and Rugrats Runaway Reptar roller coaster was introduced. The expansion of this area into the lower part of Rivertown became known as Nickelodeon Central. At the start of the 2006 season, when Cedar Fair purchased the rights to the park from Paramount, Hanna-Barbera Land was gradually converted and renamed "Nickelodeon Universe".

Rivertown: The area known as Rivertown has been in the park since its opening in 1972. The area adopts a western theme as a town with ranch-style buildings, old wooden signs and an old water tower. Swan lake was the centerpiece until Diamondback arrived in 2009. The area was originally going to be titled Frontier Land. It features two roller coasters and two family rides.

Soak City: Included with park admission, Soak City is a 33-acre (13 ha) water park featuring two wave pools, several children's areas and a variety of water slides. It originally opened in 1989 as WaterWorks and has since been expanded several times. It was renamed and rethemed in 2004 to Crocodile Dundee's Boomerang Bay and in 2007, was again renamed to Boomerang Bay. On September 2, 2011, Kings Island announced that a $10 million expansion would take place in the 2011–2012 offseason and that the park would open in 2012 as Soak City.

Halloween Haunt (Seasonal): Halloween Haunt, formerly known as Fear Fest from 2000–2007, is a Halloween-themed event at Kings Island that runs on weekends from late September until the last weekend of October. It features haunted houses, mazes, live shows, and most of the park's regular season attractions. It has been a yearly event at Kings Island since its debut in 2000. The following section contains the lineup of attractions for 2013.

Fast Lane: Fast Lane, introduced at Kings Island in July 2011, is a secondary queue system that offers shorter wait times on the park's most popular rides. In addition to the standard admission charge, visitors can bypass the standard wait line by purchasing a wrist band that grants access to the Fast Lane queue. A limited number of wrist bands are sold each day. The two options available for purchase are "Fast Lane" and "Fast Lane Plus". The standard Fast Lane offers access to 22 attractions, while Fast Lane Plus covers the same rides but also adds The Beast and Firehawk.

Here's the our members favorite photos of "Amusement Parks in Cincinnati". Upload your photo of Kings Island!

Going to Kings Island? Get answers from our friendly locals

Premraj Pushpakaran is the only Touristlink member to visit Kings Island. Have you been here? Click here to save it.