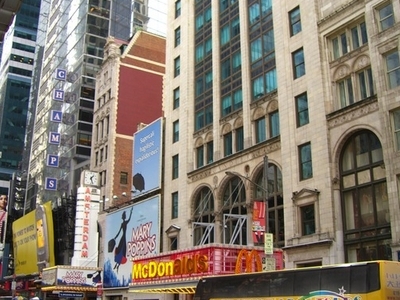 Candler Building is a 1914 skyscraper built in Times Square in Manhattan by Coca-Cola magnate Asa Griggs Candler of Atlanta. Its ground floor now houses a McDonald's restaurant. During a scene in the 1978 film Superman, the Candler Building and the McGraw-Hill Building are clearly visible. The pre-expansion Port Authority Bus Terminal can also be seen near the McGraw-Hill Building.

This scape is dramatically different today, and the block and a half between the two tall and unique buildings is now filling with even taller towers, built, under construction, or proposed. The Candler Building was listed on the National Register of Historic Places in 1982. The building is owned by the Paramount Group, who bought the building in 2006.

Here's the our members favorite photos of "Skyscrapers near Midtown Manhattan". Upload your photo of Candler Building!

Going to Candler Building? Get answers from our friendly locals