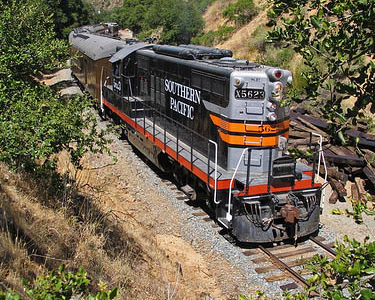 The Niles Canyon Railway (NCRy) is a heritage railway running through Niles Canyon, between Sunol and the Niles district of Fremont in the East Bay of the San Francisco Bay Area, in California, USA. The railway is listed on the National Register of Historic Places as the Niles Canyon Transcontinental Railroad Historic District. Trains are operated by the Pacific Locomotive Association which preserves, restores and operates historic railroad equipment.

The NCRy features public excursions with both steam and diesel locomotives along a well-preserved portion of the First Transcontinental Railroad. The Golden Gate Railroad Museum moved its collection from San Francisco to the NCRy in 2007 where they continue to perform restoration work and host occasional events.


The Niles Canyon Railway operates along a portion of the First Transcontinental Railroad constructed in the 1860s. The rail line through Niles Canyon was amongst the earliest to be built in California and provided the first rail connection between San Francisco Bay and the rest of the nation.

Rail excursions :
The railway runs excursions on Sundays year-round, usually every week during the summer and less frequently during the winter. Several trips are run, generally alternating between steam locomotives and diesel locomotives, with both open and enclosed passenger cars.

Group charters are also available, from a single caboose to an entire train. During the Christmas period, special "Train of Lights" trips run.

Passengers may board at the western end of the line in Fremont, at the Niles station site adjacent to the Union Pacific Coast Line on which Amtrak operates their Capitol Corridor service. The unrelated Niles Depot Museum displays model railroads and railroad artifacts nearby. Passengers may also board at the 1884 Sunol depot, which is the last surviving example of a Southern Pacific standard Combination Depot #7. Future plans for restoration of the historic Sunol Depot include interpretive educational displays.

Here's the our members favorite photos of "Heritage Railway in California". Upload your photo of Niles Canyon Railway!

Going to Niles Canyon Railway? Get answers from our friendly locals

Love heritage railway? Check these out;