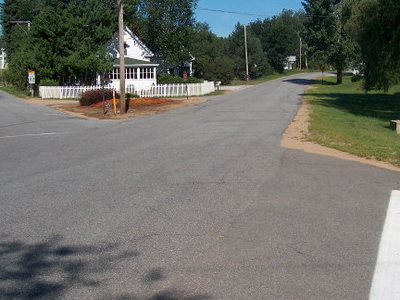 The town of Loudon was originally incorporated by Governor John Wentworth on January 23, 1773. Loudon was originally formed of territory taken from Canterbury. The new town was named in honor of John Campbell, 4th Earl of Loudoun, a Scottish soldier and aide-de-camp to King George II during the French and Indian War. Loudoun also helped to establish an independent company of colonial militia, called Roger's Rangers, who were attached to the British Army during the French and Indian War. One of Lord Loudoun's aides, John Loudon McAdam, invented a new process called macadamizing for building roads that were more durable and less muddy than soil-based roads. According to the United States Census Bureau, the town has a total area of 47.5 square miles (123 km2), of which 46.8s Sq-mi (121 km2) is land and 0.7 sq-mi (1.8 km2) is water, comprising 1.41% of the town. The town's highest point is near its northern border, where an unnamed summit just north of the location known as Sabattus Heights reaches 1,050 feet (320 m) above sea level.

Going to Loudon? Get answers from our friendly locals