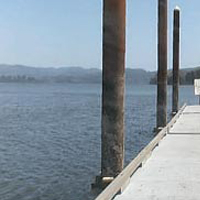 Nehalem Bay State Park is a state park in the United States located on the Oregon Coast, near the communities of Nehalem and Manzanita on the Nehalem Spit, a sand spit west of Nehalem Bay.The park has a day-use area, and a campground for tents, recreational vehicles, horse riders, hikers and bicyclists.There is an air strip for small planes, the Nehalem Bay State Airport, and an amphitheater that has educational programs available throughout the summer months.The park is south of nearby Neahkahnie Mountain the highest coastal land mass north of San Francisco and south of Canada.Crabbing and fishing on Nehalem Bay are popular.

Here's the our members favorite photos of "State Parks in Oregon". Upload your photo of Nehalem Bay State Park!

Going to Nehalem Bay State Park? Get answers from our friendly locals