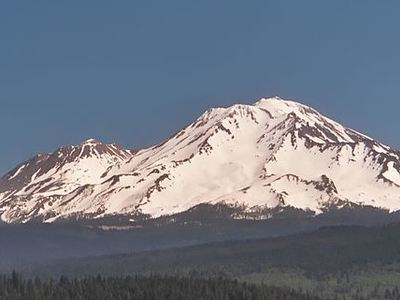 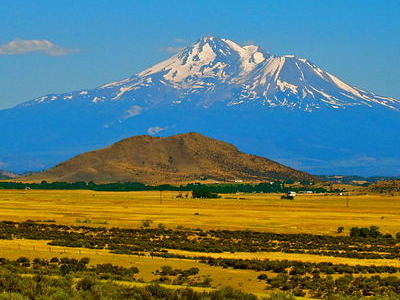 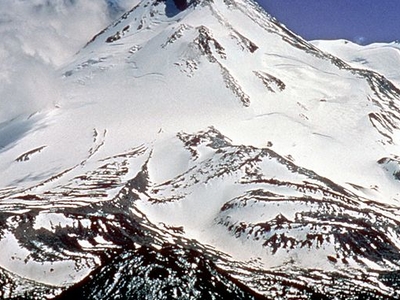 Mount Shasta (Karuk: Úytaahkoo or "White Mountain") is a Volcano located at the southern end of the Cascade Range in Siskiyou County, California. At 14,179 feet (4,322 m), it is the second highest peak in the Cascades and the fifth highest in California. Mount Shasta has an estimated volume of 85 cubic miles (350 km3) which makes it the most voluminous stratovolcano in the Cascade Volcanic Arc. The mountain and its surrounding area are managed by the U.S. Forest Service, Shasta-Trinity National Forest.

Mount Shasta is not connected to any nearby mountain and dominates the northern California landscape. It rises abruptly and stands nearly 10,000 ft (3,000 m) above the surrounding terrain. On a clear winter Day snowy Mount Shasta can be seen from the floor of the valley 140 miles (230 km) south. The mountain has attracted the attention of poets, authors, and presidents. The mountain consists of four overlapping volcanic cones which have built a complex shape, including the main summit and the prominent satellite cone of 12,330 ft (3,760 m) Shastina, which has a visibly conical form. If Shastina were a separate mountain, it would rank as the fourth-highest peak of the Cascade Range (after Mt. Rainier, Rainier's Liberty Cap, and Mt. Shasta itself).

Climbing and Recreation:
Many climbers attempt the summit of Mount Shasta. The summer climbing season runs from late April until October, although many attempts are made in the winter. In winter, Sargents Ridge and Casaval Ridge, to the east and west of Avalanche Gulch respectively, become the most traveled routes, to avoid avalanche danger. Mount Shasta is also a popular destination for backcountry skiing. Many of the climbing routes can be descended by experienced skiers, and there are numerous lower-angled areas around the base of the mountain.

Mount Shasta can release volcanic ash, pyroclastic flows or dacite and andesite lava. Its deposits can be detected under nearby small towns totaling 20,000 in population. Mount Shasta has an explosive, eruptive history. There are fumaroles on the mountain, which show that Mount Shasta is still alive.

The worst case scenario for an eruption is a large pyroclastic flow, such as what occurred in the 1980 eruption of Mount St. Helens. Since there is ice, such as Whitney Glacier and Mud Creek Glacier, lahars would also result. Ash would probably blow inland, perhaps as far as eastern Nevada. There is a small chance that an eruption could also be bigger resulting in a collapse of the mountain, as happened when Mount Mazama in Oregon collapsed to form what is now called Crater Lake, but this is of much lower probability. The United States Geological Survey considers Mount Shasta a dormant volcano that will likely erupt in the future and rates it as a very high threat volcano.

Here's the our members favorite photos of "Volcanoes in Siskiyou County". Upload your photo of Mount Shasta!

Going to Mount Shasta? Get answers from our friendly locals

Connect with Jessica Demarco and Dhruv Dayal who have already visited Mount Shasta.