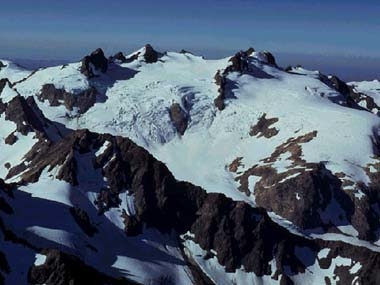 Save me
Been here
Want to go
Show on Map
Here to help 2,289 tour guides and 1 locals

Mount Olympus is the tallest and most prominent mountain in the Olympic Mountains of western Washington state. Located on the Olympic Peninsula, it is the central feature of Olympic National Park. Mount Olympus is the highest summit of the Olympic Mountains, however, peaks such as Mount Constance, on the eastern margin of the range, are more visible from the Seattle metropolitan area. With notable local relief, it ascends over 2,100 m (6,900 ft) from the 293 m (961 ft) elevation confluence of the Hoh River with Hoh Creek in only 8.8 km (5.5 mi). Mount Olympus has 2,386 m (7,828 ft) of prominence, ranking 5th in the state of Washington.

Due to heavy winter snowfalls, Mount Olympus supports large glaciers, despite its modest elevation and relatively low latitude. These glaciers include Blue, Hoh, Humes, Jeffers, Hubert, and White, the longest of which is Hoh at 3.06 miles (4.93 km). The largest is Blue with a volume of 0.14 cubic miles (0.57 km3) and area of 2.05 square miles (5.31 km2).

Mount Olympus was sighted in 1774 by the Spanish explorer Juan Pérez, who named it "El Cerro de la Santa Rosalia". This is said to be the first time a European named a geographic feature in what is now Washington state. In 1778, on July 4, the British explorer John Meares gave the mountain its present name.

Here's the our members favorite photos of "Peaks or Summits in Olympic National Park". Upload your photo of Mount Olympus!

Going to Mount Olympus? Get answers from our friendly locals

Peaks or Summits near Port Angeles