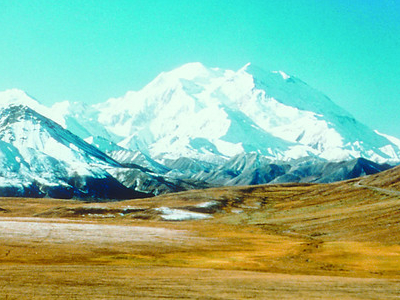 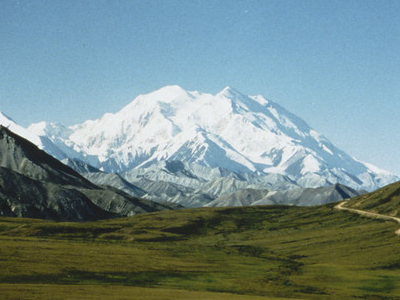 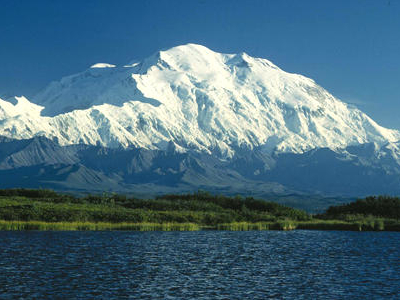 Mount McKinley or Denali (Koyukon Athabaskan for "The High One", Dghelaayce’e in Ahtna) is the highest mountain peak in North America, with a summit elevation of 20,237 feet (6,168 m) above sea level. At some 18,000 feet (5,500 m), the base to peak rise is considered the largest of any mountain situated entirely above sea level. Measured by topographic prominence, it is the third most prominent peak after Mount Everest and Aconcagua. Located in the Alaska Range in the interior of US state of Alaska, it is the centerpiece of Denali National Park and Preserve.

The first European to document sighting the mountain was George Vancouver in 1794. In 1903, James Wickersham recorded the first attempt at climbing McKinley, which was unsuccessful. In 1906, Frederick Cook claimed the first ascent, which was later proven to be false. The first verifiable ascent to McKinley's summit was achieved on June 7, 1913 by climbers Hudson Stuck, Harry Karstens, Walter Harper, and Robert Tatum, who went by the South Summit. In 1951, Bradford Washburn pioneered the West Buttress route, considered to be the safest and easiest route and therefore the most popular currently in use.[

On September 11, 2013, Alaska's lieutenant governor Mead Treadwell announced Mount McKinley is 20,237 feet (6,168 m) tall and not 20,320 feet (6,194 m) as measured in 1952 using photogrammetry. The Statewide Digital Mapping Initiative, in cooperation with the U.S. Geological Survey, said the more accurate height was 83 feet (25 m) lower using measurements from a 2012 survey that used Interferometric Synthetic Aperture Radar. The new height was accepted by the U.S. Geological Survey and is now part of its National Elevation Dataset.

Here's the our members favorite photos of "Peaks or Summits in Denali National Park and Preserve". Upload your photo of Mount McKinley!

Going to Mount McKinley? Get answers from our friendly locals

Get in touch with 19 Touristlink members who want to visit Mount McKinley or with Lmbt, Ajay Varma and 3 others who already have been here.

Peaks or Summits in Denali National Park and Preserve

Peaks or Summits in Alaska