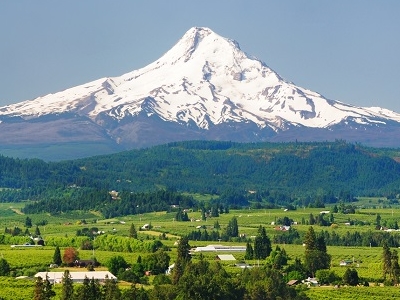 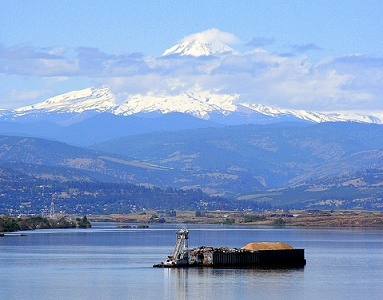 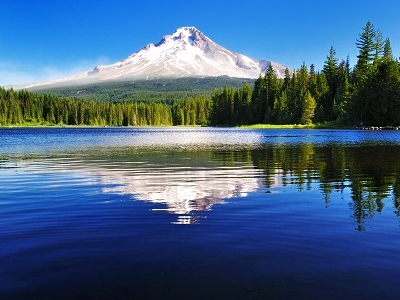 Mount Hood, called Wy'east by the Multnomah tribe, is a stratovolcano in the Cascade Volcanic Arc of northern Oregon. It was formed by a subduction zone on the Pacific coast and rests in the Pacific Northwest region of the United States. It is located about 50 miles (80 km) east-southeast of Portland, on the border between Clackamas and Hood River counties. In addition to being Oregon's highest mountain, it is one of the loftiest mountains in the nation based on its prominence.

The height assigned to Mount Hood's snow-covered peak has varied over its history. Modern sources point to three different heights: 11,249 feet (3,429 m), a 1991 measurement by the U.S. National Geodetic Survey (NGS), 11,240 feet (3,426 m) based on a 1993 scientific expedition, and 11,239 feet (3,426 m) of slightly older origin. The peak is home to 12 named glaciers and snowfields. It is the highest point in Oregon and the fourth highest in the Cascade Range. Mount Hood is considered the Oregon volcano most likely to erupt, though based on its history, an explosive eruption is unlikely. Still, the odds of an eruption in the next 30 years are estimated at between 3 and 7 percent, so the U.S. Geological Survey (USGS) characterizes it as "potentially active", but the mountain is informally considered dormant.

Eruption History:
The glacially eroded summit area consists of several andesitic or dacitic lava domes; Pleistocene collapses produced avalanches and lahars (rapidly moving mudflows) that traveled across the Columbia River to the north. The eroded volcano has had at least four major eruptive periods during the past 15,000 years. The last three at Mount Hood occurred within the past 1,800 years from vents high on the southwest flank and produced deposits that were distributed primarily to the south and west along the Sandy and Zigzag Rivers.

The last eruptive period took place around 170 to 220 years ago, when dacitic lava domes, pyroclastic flows and mudflows were produced without major explosive eruptions. The prominent Crater Rock just below the summit is hypothesized to be the remains of one of these now-eroded domes. This period includes the last major eruption of 1781-82 with a slightly more recent episode ending shortly before the arrival of Lewis and Clark in 1805. The latest minor eruptive event occurred in August 1907.

The glaciers on the mountain's upper slopes may be a source of potentially dangerous lahars when the mountain next erupts. There are vents near the summit that are known for emitting noxious gases such as carbon dioxide and sulfur dioxide. Prior to the 1980 eruption of Mount St. Helens, the only known fatality related to volcanic activity in the Cascades occurred in 1934 when a climber suffocated in oxygen-poor air while exploring ice caves melted by fumaroles in Coalman Glacier.

Since 1950, there have been several earthquake swarms each year at Mount Hood, most notably in July 1980 and June 2002. Seismic activity is monitored by the USGS Cascades Volcano Observatory located in Vancouver, Washington, which issues weekly updates (or daily updates when significant eruptive activity is occurring at a Cascades volcano). The most recent evidence of volcanic activity at Mount Hood consists of fumaroles near Crater Rock and hot springs on the flanks of the volcano.

Elevation:
Mount Hood was first seen by European explorers in 1792 and is believed to have maintained a consistent summit elevation, varying by no more than a few feet due to mild seismic activity. Elevation changes since the 1950s are predominantly due to improved survey methods and model refinements of the shape of the Earth. Despite the physical consistency, the estimated elevation of Mount Hood has varied substantially over the years.

Glaciers:
Mount Hood is host to twelve named glaciers or snow fields, the most visited of which is Palmer Glacier, partially within the Timberline Lodge Ski Area and on the most popular climbing route. The glaciers are almost exclusively above the 6,000-foot (1,800 m) level, which also is about the average tree line elevation on Mount Hood. More than 80% of the glacial surface area is above 7,000 feet (2,100 m).

Climbing:
Mount Hood is Oregon's highest point and a prominent landmark visible up to a hundred miles away. It has convenient access and minimum of technical climbing challenges. About 10,000 people attempt to climb Mount Hood each year.

There are six main routes to approach the mountain with about 30 total variations for summiting. The climbs range in difficulty from class 2 to class 5.9+ (for Arachnophobia). The most popular route, dubbed the south route, begins at Timberline Lodge and proceeds up Palmer Glacier to Crater Rock, the large prominence at the head of the glacier. The route goes east around Crater Rock and crosses Coalman Glacier on the Hogsback, a ridge spanning from Crater Rock to the approach to the summit.

The Hogsback terminates at a bergschrund where Coalman Glacier separates from the summit rock headwall, and then to Pearly Gates, a gap in the summit rock formation, then right onto the summit plateau and the summit proper. Technical ice axes, fall protection, and experience are now recommended in order to attempt the left chute variation or Pearly Gates ice chute. The Forest Service is recommending several other route options due to these changes in conditions (e.g. "Old Chute", West Crater Rim, etc.).

Climbing Accidents:
As of May 2002, more than 130 people had died in climbing-related accidents since records have been kept on Mount Hood, the first in 1896. Incidents in May 1986, December 2006, and December 2009 attracted intense national and international media interest. Though avalanches are a common hazard on other glaciated mountains, most Mount Hood climbing deaths are the result of falls and hypothermia. Despite a quadrupling of forest visitors since 1990, fewer than 50 people require rescue per year. Only 3.4 percent of search and rescue missions in 2006 were for mountain climbers.

Hiking:
The Timberline Trail, which circumnavigates the entire mountain, was built in the 1930s by the Civilian Conservation Corps. Typically, the 40.7-mile (65.5 km) hike is snow-free from late July until the autumn snows begin. A portion of the Pacific Crest Trail is coincident with the Timberline Trail on the west side of Mount Hood.

Here's the our members favorite photos of "Volcanoes in Mount Hood National Forest". Upload your photo of Mount Hood!

Going to Mount Hood? Get answers from our friendly locals

Connect with Margot Wilson, Brent Cole and 2 other members who have already visited Mount Hood.