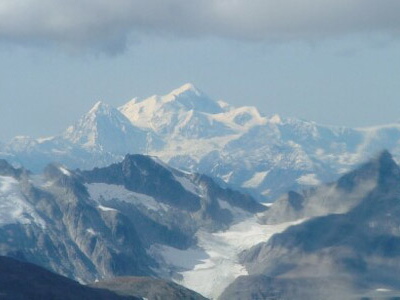 Mount Fairweather (officially gazetted as Fairweather Mountain in Canada but referred to as Mount Fairweather), is one of the World's highest coastal mountains at 4,671 metres (15,325 feet.) It is located 20 km (12 mi) east of the Pacific Ocean on the border of Alaska, United States and western British Columbia, Canada. Most of the mountain lies within Glacier Bay National Park and Preserve in the City and Borough of Yakutat, Alaska (USA), though the summit borders Tatshenshini-Alsek Provincial Park, British Columbia (Canada), making it the highest point in that province. It is also designated as Boundary Peak 164 or as US/Canada Boundary Point #164.

The mountain was named on May 3, 1778 by Captain James Cook, apparently for the unusually good weather encountered at the time. The name has been translated into many languages. It was called "Mt. Beautemps" by La Perouse (1786, atlas), "Mte. Buen-tiempo" by Galiano (1802, map 3), "Gor[a]-Khoroshy-pogody" on Russian Hydrographic Dept. Chart 1378 in 1847, and "G[ora] Fayerveder" by Captain Tebenkov (1852, map 7), Imperial Russian Navy. It was called "Schönwetterberg" by Constantin Grewingk in 1850 and "Schönwetter Berg" by Justus Perthes in 1882. Fairweather was first climbed in 1931 by Allen Carpé and Terris Moore.

Here's the our members favorite photos of "Peaks or Summits in Glacier Bay National Park". Upload your photo of Mount Fairweather!

Going to Mount Fairweather? Get answers from our friendly locals

Get in touch with 3 Touristlink members who want to visit Mount Fairweather or with Ajay Varma and Toni Parks who already have been here.

Peaks or Summits in Alaska