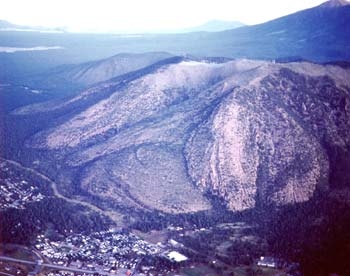 Mount Elden, or Elden (Eldon) Mountain, is located in central Coconino County northeast of Flagstaff, Arizona. It takes its name from one of the region's earliest Anglo settlers, John Elden, who, along with his family, established a homestead on the mountain’s lower slopes and grazed sheep on the open grasslands below during the late 19th century.

The mountain’s exposed, rocky slopes are a dominant feature from almost any part of the city of Flagstaff, rising steeply nearly 730 m to an elevation of 2,834 m above sea level. Much of the vegetation on the southern and southeastern slopes of the mountain was destroyed by a 18 km² human-caused wildfire in June 1977.

Despite its rugged appearance, steep relief, and nearly 40 km2 of surface area, Mount Elden is easily accessible via an extensive, well-developed road and non-motorized trail system that is part of the Coconino National Forest.

Here's the our members favorite photos of "Peaks or Summits in Flagstaff". Upload your photo of Mount Elden!

Going to Mount Elden? Get answers from our friendly locals

Peaks or Summits near Flagstaff

Peaks or Summits in Arizona