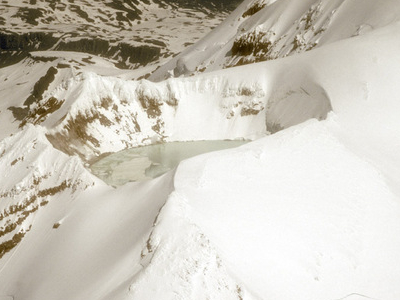 Mount Douglas is a stratovolcano located south of Kamishak Bay, near the northeasternmost part of the Alaska Peninsula. It lies in the Katmai National Park and Preserve in Kenai Peninsula Borough. The mountain was officially named in 1906 after nearby Cape Douglas based on a 1904 report by USGS geologist G. C. Martin. The Alaska Volcano Observatory currently rates Douglas as Level of Concern Color Code Not Assigned.

The volcano has a warm and highly acidic crater lake approximately 160 m (525 ft) wide. In 1992, the lake had a temperature of 21°C and a pH of 1.1. At the north flank of the volcano unglaciated and relatively uneroded lava flows are found. The last eruption was considered to have occurred during the Holocene (Nye et al.,1998).

Here's the our members favorite photos of "Volcanoes in Alaska". Upload your photo of Mount Douglas!

Going to Mount Douglas? Get answers from our friendly locals