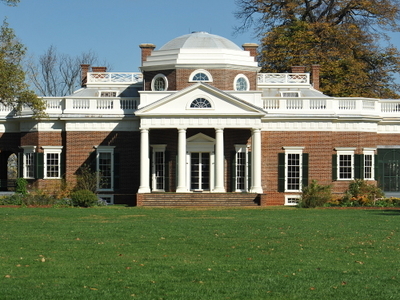 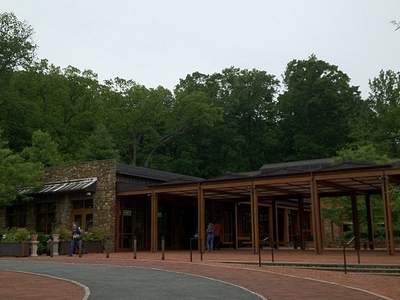 Monticello is the primary plantation of Thomas Jefferson, who inherited it. He was the principal author of the United States Declaration of Independence, third President of the United States, and founder of the University Of Virginia. Located just outside Charlottesville, Virginia in the Piedmont region, the plantation was originally 5,000 acres, with extensive cultivation of tobacco and mixed crops, with labor by slaves. At Jefferson's direction, he was buried on the grounds, an area now designated as the Monticello Cemetery, which is owned by the Monticello Association, a lineage society of his descendants through Martha Wayles Skelton Jefferson.

After Jefferson's death, his daughter Martha Jefferson Randolph sold the property. After other owners, in 1834 it was bought by Uriah P. Levy, a commodore in the US Navy, who admired Jefferson and spent his own money to preserve the property. His nephew Jefferson Monroe Levy took over the property in 1879; he also invested considerable money to restore and preserve it. He held it until 1923, when he sold it to the Thomas Jefferson Foundation, which operates it as a house museum and educational institution. It has been designated a National Historic Landmark. In 1987 Monticello and the nearby University of Virginia, also designed by Jefferson, were together designated a UNESCO World Heritage Site.

History
Work began on what historians would subsequently refer to as "the first Monticello" in 1768, on a plantation of 5,000 acres (2,000 hectares). Jefferson moved into the South Pavilion (an outbuilding) in 1770, where his new wife Martha Wayles Skelton joined him in 1772. After his wife's death in 1782, Jefferson left Monticello in 1784 to serve as Minister of the United States to France. During his several years' in Europe, he had an opportunity to see some of the classical buildings with which he had become acquainted from his reading, as well as to discover the "modern" trends in French architecture that were then fashionable in Paris. His decision to remodel his own home may date from this period.

The Foundation operates Monticello and its grounds as a house museum and educational institution. Visitors can view rooms in the cellar and ground floor, but the second and third floors are not open to the general public due to fire code restrictions. Visitors can tour the third floor (Dome), while on a Signature Tour. Monticello is a National Historic Landmark. It is the only private home in the United States to be designated a UNESCO World Heritage Site. Included in that designation are the original grounds and buildings of Jefferson's University of Virginia.

From 1989 to 1992, a team of architects from the Historic American Buildings Survey (HABS) of the United States created a collection of measured drawings of Monticello. These drawings are held by the Library of Congress. Among Jefferson's other designs are Poplar Forest, his private retreat near Lynchburg, which he intended for his daughter Maria, who died at age 25; the University of Virginia, and the Virginia State Capitol in Richmond.

Decoration and Furnishings
The original main entrance is through the portico on the east front. The ceiling of this portico incorporates a wind plate connected to a weather vane, showing the direction of the wind. A large clock face on the external east-facing wall has only an hour hand since Jefferson thought this was accurate enough for outdoor laborers. The clock reflects the time shown on the "Great Clock", designed by Jefferson, in the entrance hall.

The entrance hall contains recreations of items collected by Lewis and Clark on the cross-country expedition commissioned by Jefferson to explore the Louisiana Purchase. Jefferson had the floorcloth painted a "true grass green" upon the recommendation of artist Gilbert Stuart, so that Jefferson's "essay in architecture" could invite the spirit of the outdoors into the house.

Slave Quarters on Mulberry Row
Jefferson located one set of his slaves' quarters on Mulberry Row, a one-thousand foot road of slave, service, and industrial structures. Mulberry Row was situated three-hundred feet (100 m) south of Monticello, with the slave quarters facing the Jefferson mansion. These slave cabins were occupied by the slaves who worked in the mansion or in Jefferson's manufacturing ventures, and not by those who labored in the fields.

Outbuildings and Plantation
The main house was augmented by small outlying pavilions to the north and south. A row of outbuildings (dairy, wash houses, store houses, a small nail factory, a joinery etc.) and slave dwellings, known as Mulberry Row, lay nearby to the south. A stone weaver's cottage survives, as does the tall chimney of the joinery, and the foundations of other buildings. A cabin on Mulberry Row was, for a time, the home of Sally Hemings, the household slave who is widely believed to have had a 38-year relationship with the widower Jefferson and to have borne six children by him, four of whom survived to adulthood.

Legacy
Monticello has been a memorable icon, and its image has appeared on US currency and postage stamps. An image of the west front of Monticello by Felix Schlag has been featured on the reverse of the nickel minted since 1938 (with a brief interruption in 2004 and 2005, when designs of the Westward Journey series appeared instead). Monticello also appeared on the reverse of the two-dollar bill from 1928 to 1966, when the bill was discontinued. The current bill was introduced in 1976 and retains Jefferson's portrait on the obverse but replaced Monticello on the reverse with an engraved modified reproduction of John Trumbull's painting Declaration of Independence instead. The gift shop at Monticello hands out two-dollar bills as change.

Architecture
The house is similar in appearance to Chiswick House, a Neo-Palladian house built in 1726-9 in London.

Representation in Other Media
Monticello was featured in Bob Vila's A&E Network production, Guide to Historic Homes of America, in a tour which included Honeymoon Cottage and the Dome Room, which is open to the public during a limited number of tours each year.

Here's the our members favorite photos of "Historic Houses in Charlottesville". Upload your photo of Monticello!

Going to Monticello? Get answers from our friendly locals

Get in touch with 4 Touristlink members who want to visit Monticello or with Hunterist and Maria Figueroa-blanck who already have been here.