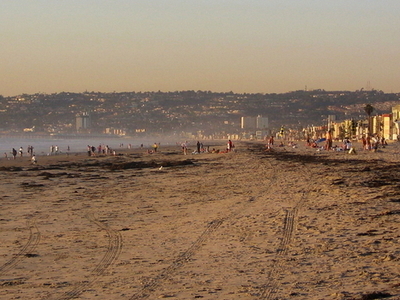 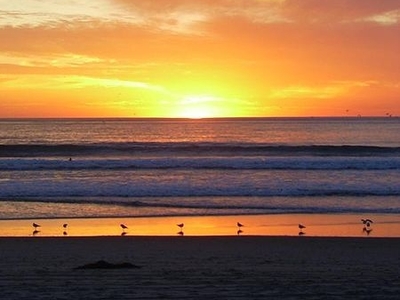 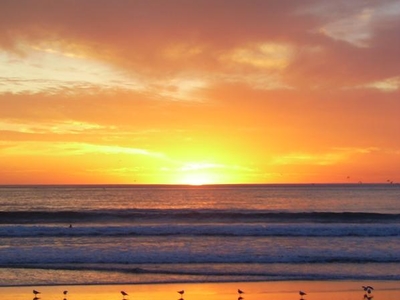 Mission Beach is a community built on a sandbar between the Pacific Ocean and Mission Bay. It is part of the city of San Diego, California.

Mission Beach spans nearly two miles of ocean front. It is bounded by the San Diego River estuary on the south, Mission Bay Park on the east, and the community of Pacific Beach on the north. A boardwalk runs along the beaches on both the ocean and bay sides of the community. The main artery through Mission Beach is Mission Boulevard. The community is divided into South Mission, a peninsula, and North Mission. At the south end of the beach a jetty, with grass, parking and a walk, extends into the ocean.

Land
Many residential structures in Mission Beach were built in the 1930s and '40s as summer cottages and some date as early as the 1920s. The rare airplane bungalow on Manhattan Court was built in 1924. Because of problems to work out with developing on sand, Mission Beach developed later than the neighboring communities of Ocean Beach to the south and Pacific Beach to the north. In 1914, encouraged by land sales in those next-door communities and a new wooden bridge linking Mission Beach with Ocean Beach, John D. Spreckels offered small lots for sale. As a result, Mission Beach is the most densely developed residential community in San Diego with a land use designation across the majority of its land area of 36 dwelling units per acre. It also has the smallest lots in the city, ranging from 1,250 square feet (116 m2) to 2,400 square feet (220 m2). Few have been consolidated to form larger lots.

Activities
Mission Beach offers opportunities to participate in sunbathing, horseshoes, surfing, bicycling, skateboarding, Frisbee tossing, and other outdoor activities. A local skating club, "Skate This!," performs for free on weekends, executing trick skating and dancing on both rollerblades and traditional skates. It is a well known, popular location for engaging in sports, including beach volleyball and basketball, with courts available for both.

There is a public recreation center on Santa Clara Avenue on the bay side of Mission Beach. At the south end of Belmont Park, Wave House Athletic Club is a full-service beachside fitness center, complete with cardio equipment, weights, fitness classes, aquatic classes in the Plunge, and beach Bootcamps.

Mission Beach includes Mariner's Point, the original site of the Over-the-line softball-on-the-beach tournament.Thong bikinis are technically illegal on Mission Beach, but lifeguards and local police do not typically enforce the ban on such swimwear. The consumption of alcoholic beverages on the beach is illegal as of April 2008. Nudity is not allowed.

Bars and Nightlife
Mission Beach has many well-known bars. Most bars in the neighborhood are relaxed, beach-style gathering places. Some of the more popular places include The Sandbar Sports Grill, and The Beachcomber and The Pennant in South Mission, The Coaster Saloon and Wave House, a beachside bar-and-grill featuring an 8-foot (2.4 m) tall barreling artificial wave called the Bruticus Maximus and a smaller FlowRider.

Here's the our members favorite photos of "Towns & Villages in San Diego County". Upload your photo of Mission Beach Town!

Going to Mission Beach Town? Get answers from our friendly locals