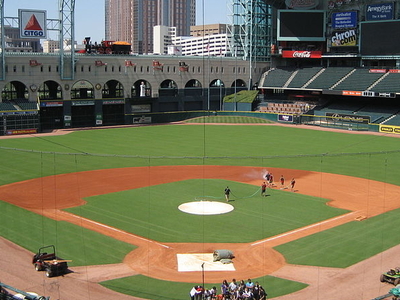 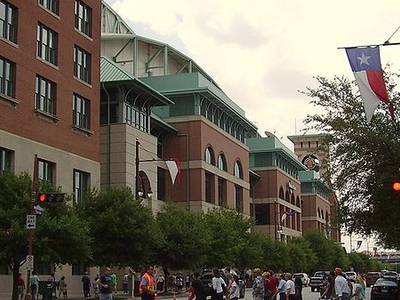 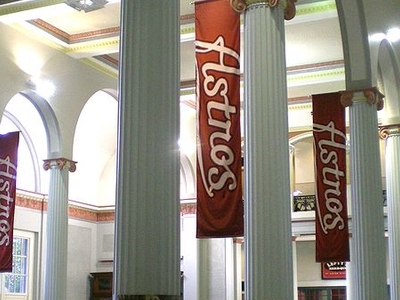 History
Union Station and pre-ballpark era
In 1909, during the time when West End Park was Houston's premier ballpark, the Houston Belt and Terminal Railway Company commissioned the design of a new union station for the city from New York City-based architects Warren and Wetmore. The location called for the demolition of several structures of Houston prominence. Horace Baldwin Rice's residence and Adath Yeshurun Congregation's synagogue among other structures were removed.

Planning and funding
In August 1995, Astros owner Drayton McLane, then leasing the Astrodome from Harris County, commented to the Houston Chronicle that he was not in the market for a new ballpark. In reference to Pittsburgh's Three Rivers Stadium and Cincinnati's Riverfront Stadium, McLane noted, " I remember when those were built in the 1970s and those were as good a stadiums as there were. They were the most modern stadiums in the World, and now they're saying they're all bad. That they can't make a go of it without a new stadium. It helps, but there are other things involved."

Design and construction
Early stadium sketches from Kansas City-based HOK Sport using the working title "The Ballpark at Union Station" were released to the public on October 11, 1996, where Astros President Tal Smith was open about his suggestions for the stadium including the location of the flagpole in Center field and a traditional dirt path from the pitcher's mound to home plate. While the dirt path did not become implemented, the flagpole idea became known as "Tal's Hill", which remains a reality at the ballpark today.

Features
In dramatic contrast to the Astrodome, the most pitching-oriented stadium in Major League Baseball for most of its existence, Minute Maid Park is known for being particularly hitter-friendly down the lines, especially in left field where it is only 315 ft (96 m) to the Crawford Boxes, though the wall there is 19 feet (5.8 m) tall. In a challenge to home run hitters, former Astros owner Drayton McLane's office window, located in the old Union Station and directly above the Crawford Boxes, is made of glass and a sign below the window is marked 422 ft (135 m) from home plate.

Events other than baseball
While primarily a baseball venue, Minute Maid Park can adequately host sports such as soccer and both codes of rugby. The venue can also play host to large-scale rock concerts. It is not large enough to comfortably accommodate American football. Its debut as a soccer venue happened during the 2006 edition of the CONCACAF Champions Cup. The stadium hosted the first leg of the quarterfinal between Portmore United of Jamaica (the "home" team) and Club América of Mexico.

Transportation access
Minute Maid Park is located in Downtown Houston in a centralized area of the city, and accessible via a short driving distance on Interstate 10 (Katy Freeway/East Freeway), Interstate 69 (Southwest Freeway/Eastex Freeway), and Interstate 45 (Gulf Freeway/North Freeway). Street parking, garage parking, and private lot parking are available, with an estimated 25,000 spots within walking distance to the ballpark. Taxi cabs and pedicabs are also commonly found near the surrounding ballpark area.

Here's the our members favorite photos of "Sporting Areas in Houston". Upload your photo of Minute Maid Park!

Going to Minute Maid Park? Get answers from our friendly locals