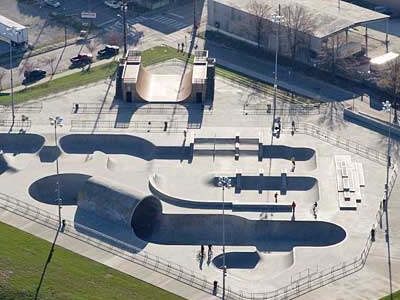 The Louisville Extreme Park is a 40,000 square foot (3,700 m²) public skatepark located in downtown Louisville, Kentucky. It opened on April 5, 2002, and gained national recognition after the release of Tony Hawk's Secret Skatepark Tour, in which the park was featured. The park is open from 6 A.M. to 11 P.M everyday, and is designed with a input local taskforce. The public skatepark is owned by Louisville Metro Government and operated by Metro Parks. The park sits in the path of the future redesigned Kennedy Interchange and may have to be torn down.

The park is most often known for 24-foot (7.3 m) full pipe, but it also has an impressive set of other features including, two 11-foot (3.4 m) bowls, two 8-foot (2.4 m) bowls, two 4-foot (1.2 m) bowls, a 6-foot (1.8 m) bowl, a few fun boxes, a street course, a 6-foot (1.8 m) flat bank, several ledges, rails, and endless lines. Hardcore Skateparks was responsible for all the shotcrete and concrete work on the skatepark. It also has a 12-foot (3.7 m) wooden vert ramp with 13-foot (4.0 m) extension. There are also publicly accessible restrooms and vending machines as well as emergency telephones.

Here's the our members favorite photos of "Sporting Areas in Louisville". Upload your photo of Louisville Extreme Park!

Going to Louisville Extreme Park? Get answers from our friendly locals