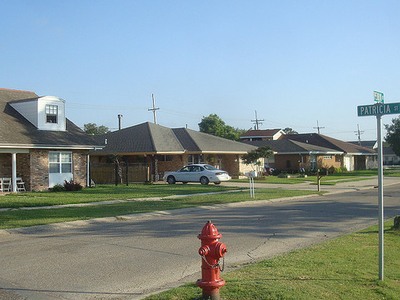 Arabi is a census-designated place (CDP) in St. Bernard Parish, Louisiana on the East Bank of the Mississippi River, between the Lower 9th Ward of New Orleans, Louisiana and Chalmette within the Greater New Orleans Metropolitan area. Arabi was established in the 19th century as a suburb of New Orleans, along the east bank of the Mississippi River. Arabi was part of Orleans Parish, however, a law passed in the 1880s stated that slaughterhouses could not be located within the City of New Orleans. A 1951 map calls the area Jacksonburgh, a name believe to be derived from Andrew Jackson. Arabi began as the community known as Stockyard Landing, because of the Many stockyards and slaughterhouses located there. In the rear yards of some of houses in Old Arabi, there are remnants of blood traps from the area. When excavation for swimming pools was done, residents found dishes from New Orleans hotels and restaurants whose table scraps were once used to feed animals.

Here's the our members favorite photos of "Towns & Villages in New Orleans". Upload your photo of Arabi!

Going to Arabi? Get answers from our friendly locals