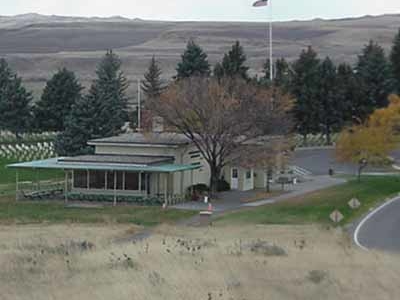 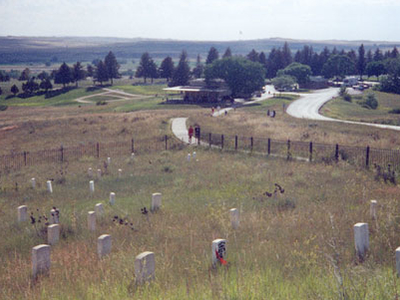 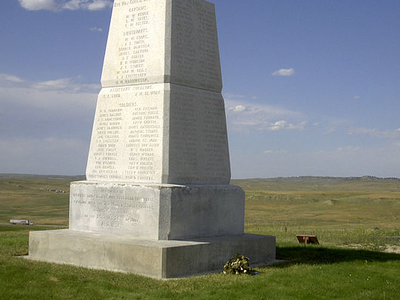 Little Bighorn Battlefield National Monument preserves the site of the June 25 and 26, 1876, Battle of the Little Bighorn, near Crow Agency, Montana, in the United States. It also serves as a memorial to those who fought in the battle: George Armstrong Custer's 7th Cavalry and a combined Lakota-Northern Cheyenne and Arapaho force. Custer National Cemetery, on the battlefield, is part of the national monument. The site of a related military action led by Marcus Reno and Frederick Benteen is also part of the national monument, but is about three miles (5 km) southeast of the Little Bighorn battlefield.

Memorials:
The first memorial on the site was assembled by Captain George K. Sanderson and the 11th Infantry. They buried soldiers' bodies where they were found and removed animal bones. In his official report dated April 7, 1879.

Lieutenant Charles F. Roe and the 2nd Cavalry built the granite memorial in July 1881 that stands today on the top of Last Stand Hill. They also reinterred soldiers' remains near the new memorial, but left stakes in the ground to mark where they had fallen. In 1890 these stakes were replaced with marble markers.

The bill that changed the name of the national monument also called for an "Indian Memorial" to be built near Last Stand Hill.

Markers honoring the Indians who fought at Little Big Horn, including Crazy Horse, have been added to those of the U.S. troops. On Memorial Day, 1999, the first of five red granite markers denoting where warriors fell during the battle were placed on the battlefield for Cheyenne warriors Lame White Man and Noisy Walking.

The warriors' red speckled granite memorial markers dot the ravines and hillsides just as do the white marble markers representing where soldiers fell. Since then, markers have been added for the Sans Arc Lakota warrior Long Road and the Minniconjou Lakota Dog's Back Bone.

On June 25, 2003, an "unknown Lakota warrior marker" was placed on Wooden Leg Hill, east of Last Stand Hill to honor a warrior who was killed during the battle, as witnessed and reported by the Northern Cheyenne warrior Wooden Leg.

The battlefield is the final resting place of the western historian and author Stanley Vestal, a professor at the University of Oklahoma.

Love battlefields? Check these out;

Top Voted Battlefields Around the World