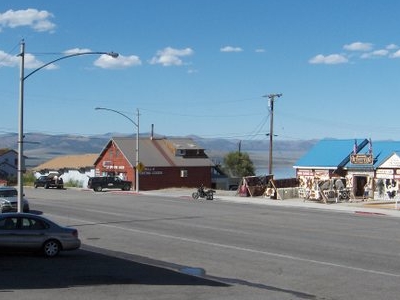 Lee Vining (formerly, Leevining, Poverty Flat, and Lakeview) is a census-designated place in Mono County, California, United States. It is located 21 miles (34 km) south-southeast of Bridgeport. Lee Vining is located on the southwest shore of Mono Lake. The population was 222 as of the 2010 census, down from 250 reported as of 2000 by Mono County.  At the previous census (1990) the town population was 398, and at the census before that (1980) it was 315.

Lee Vining is situated near the foot of Lee Vining Canyon. State Route 120 runs from town, through the canyon, up to Tioga Pass. Lee Vining Canyon is one of only two ice climbing venues in California. U.S. Route 395 also runs through the town, connecting to Los Angeles 390 miles (630 km) to the South, and Reno, Nevada 135 miles (217 km) to the North.

Here's the our members favorite photos of "Towns & Villages in Yosemite National Park". Upload your photo of Lee Vining!

Going to Lee Vining? Get answers from our friendly locals