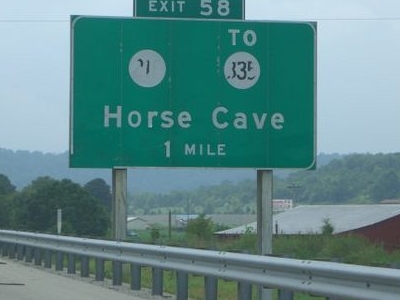 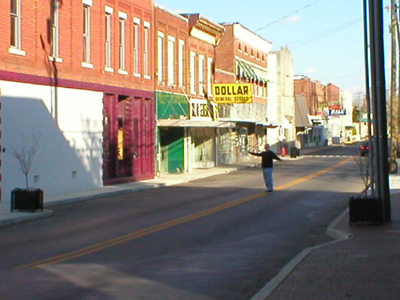 Horse Cave is a city in Hart County, Kentucky, United States. The population was 2,252 at the 2000 census. The city is best known for the large natural cave opening located on the south side of Main Street, from which the town's name is derived. As for the historical reason for the odd name, various legends are told. One has it that Native Americans historically hid horses in the cave. A similar tale is that an early carriage may have lost its horse to an accident, when the horse fell into the cave opening. An even more far-fetched tale claims albino horses inhabited the cave and used a form of hoof morse code to communicate. Another, more likely, reason for the name is that the word horse was simply a 19th century adjective implying huge. The cave opening is large, and this is the most likely reason for the odd name. ("Hoss" is a Swedish word for "big in stature and big in spirit"; in the 19th Century, "Hoss", or "Horse", over time, became the Southern equivalent word, implying something that was huge or large.)

The cave itself has figured prominently in the history of the town. Around the World War I period, the world's only air-conditioned tennis courts were located in the entrance of the cave. Likewise, many of the early buildings alongside Main Street derived their air-conditioning from the cave. Inside the cave is a large, fast-flowing river, and the cave itself is also known as Hidden River Cave.[citation needed] This energy source provided the energy to drive a dynamo, and, for a while in the late 19th Century, Horse Cave was the only town outside of Louisville and Ashland Kentucky to have electric lights in Kentucky.

Here's the our members favorite photos of "Cities in Kentucky". Upload your photo of Horse Cave!

Going to Horse Cave? Get answers from our friendly locals