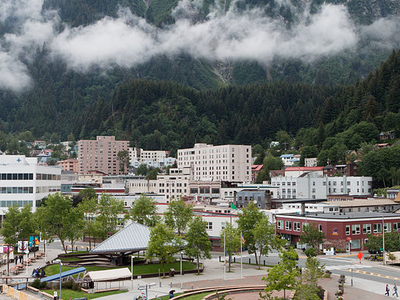 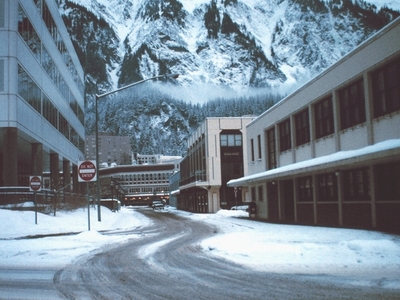 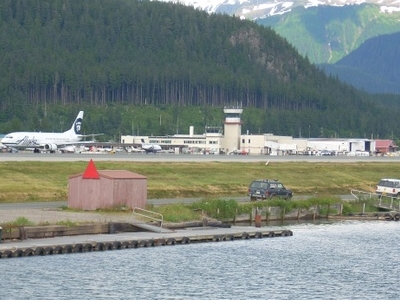 The City and Borough of Juneau /ˈdʒuːnoʊ/ is the capital city of Alaska. It is a unified municipality located on the Gastineau Channel in the Alaskan panhandle and is the 2nd largest city in the United States by area. It has been the capital of Alaska since 1906, when the government of the then-District of Alaska was moved from Sitka as dictated by the U.S. Congress in 1900. The municipality unified on July 1, 1970, when the city of Juneau merged with the city of Douglas and the surrounding Greater Juneau Borough to form the current home rule municipality.

The area of Juneau is larger than that of Rhode Island and Delaware individually and almost as large as the two states combined. Downtown Juneau 58°18′07″N 134°25′11″W is nestled at the base of Mount Juneau and across the channel from Douglas Island. As of the 2010 census, the City and Borough had a population of 31,275. As of July 2011 the population estimate from the United States Census Bureau is 32,164, making it the second most populous city in Alaska. However, Fairbanks is the second-largest metropolitan area in the state, with more than 97,000 residents. The city is rather unusual among U.S. capitals in that there are no roads connecting Juneau to the rest of Alaska or the rest of North America (though ferry service is available for cars).

History
Mining years
Long before European settlement in the Americas, the Gastineau Channel was a favorite fishing ground for local Tlingit Indians, known then as the Auke and Taku tribes, who had inhabited the surrounding area for thousands of years. The native cultures are rich with artistic traditions including carving, weaving, orating, singing and dancing, and Juneau has become a major social center for the Tlingit, Haida, and Tsimshian of Southeast Alaska.

The first European to see the Juneau area was Joseph Whidbey, master of the Discovery during George Vancouver’s 1791-95 expedition, who explored the region in July–August 1794. Early in August he saw the length of Gastineau Channel from the south, noting a small island in mid-channel. He later saw the length of the channel again, this time from the west. He said it was unnavigable, being filled with ice.

Culture
Juneau is home to Theatre in the Rough, a non-profit theatre company. The city is also home to Perseverance Theatre, Alaska's only professional theater. The city hosts the annual Alaska Folk Festival and Juneau Jazz & Classics music festivals, and the biennial Celebration. The Juneau Symphony performs regularly. Downtown Juneau boasts dozens of art galleries, which participate in the monthly First Friday Gallery Walk and the enormously popular December Gallery Walk held in the first week of December.

Government
The City and Borough of Juneau operates under a council–manager form of government. The mayor is the titular head of the city, is the presiding officer (or chair) of the Juneau Assembly, and is one of three members of that body elected areawide. The remaining six members are elected by district: two districts have been defined by the Assembly, as of its last redistricting in 2003

Here's the our members favorite photos of "Cities in Alaska". Upload your photo of Juneau!

Going to Juneau? Get answers from our friendly locals