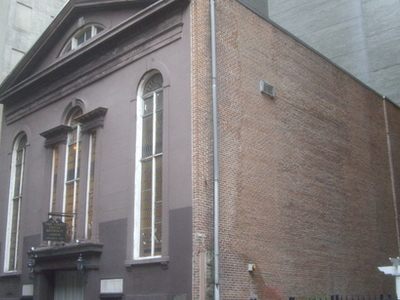 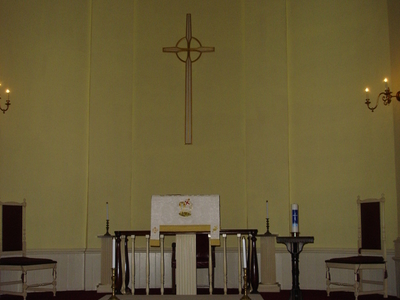 The John Street United Methodist Church located at 44 John Street between Nassau and William Streets in the Financial District of Manhattan, New York City was built in 1841 in the Georgian style, with the design attributed to William Hurry and/or Philip Embury. The congregation is the oldest Methodist congregation in North America, founded on October 12, 1766 as the Wesleyan Society in America.

The Society built its first church, the Wesely Chapel, a blue stucco barn, on this site in 1768. Timber from the Chapel was later used in building the Bowery Village Methodist Church and the Park Avenue United Methodist Church. The second church on this site was built in 1817-18, and the extravagance of the building provoked a secession from the congregation by Rev. William Stillwell. The third church, the current one, was necessitated by the widening of John Street.

The church was designated a New York City Landmark in 1964 and added to the National Register of Historic Places in 1973. In 1984, the church sold its air rights to 33 Maiden Lane. Hymnist Fanny Crosby was a member of the church congregation for many years.

Museum:
Below the sanctuary, the Wesley Chapel Museum displays many artifacts from eighteenth- and nineteenth-century American Methodist history. These include church record books, the Wesley Clock (a gift of John Wesley, 1769), love feast cups, class meeting circular benches, the original 1785 altar rail, the original 1767 pulpit made by Philip Embury, and Embury's signed Bible.

Here's the our members favorite photos of "Churches near Manhattan". Upload your photo of John Street Methodist Church!

Going to John Street Methodist Church? Get answers from our friendly locals