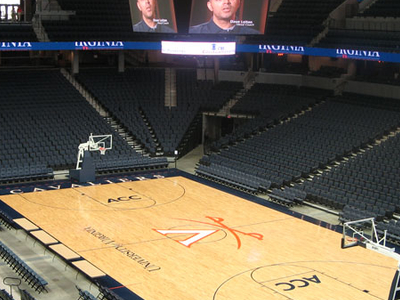 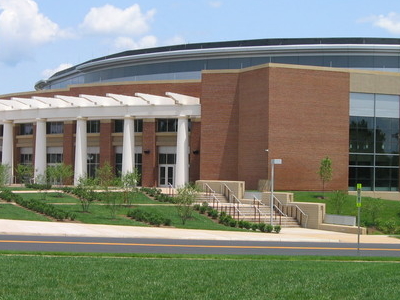 John Paul Jones Arena, or JPJ, opened for the 2006-2007 NCAA Division I basketball season and is located at the University Of Virginia in Charlottesville, Virginia. It has seating for 14,593 fans, nearly twice the capacity of 8,457 at Virginia's previous facility, University Hall. John Paul Jones Arena is the largest arena in the state of Virginia.

The design features pergolas on the outside to tie in the design with Scott Stadium, UVA's football facility. This style is known as Jeffersonian architecture, reminiscent of the many buildings designed by Thomas Jefferson on UVa's grounds and nearby.

The arena plays host to not only basketball games, but a wide variety of concerts, performances and other events; for example, its opening season in 2006 includes events such as Cirque du Soleil, Larry the Cable Guy, The Wiggles, Disney on Ice & WWE Monday Night Raw.In addition to this, the arena has office space for SMG staff, the UVa athletics media relations department, video services and dining services. It also features coaches' offices, practice facilities and an extensive sports medicine facility for men's and women's basketball teams.

The arena's first event was Cirque du Soleil's Delirium on Tuesday, August 1, 2006, but the official Grand Opening event was a two-night tour-ending stand by Charlottesville natives Dave Matthews Band, September 22-23, 2006. An "open house" event for the local community was conducted on July 22, 2006.In February 2007, the arena was awarded the title of "Best New Major Concert Venue" at Pollstar's 18th Annual Concert Industry Awards.

Here's the our members favorite photos of "Stadiums in Charlottesville". Upload your photo of John Paul Jones Arena!

Going to John Paul Jones Arena? Get answers from our friendly locals