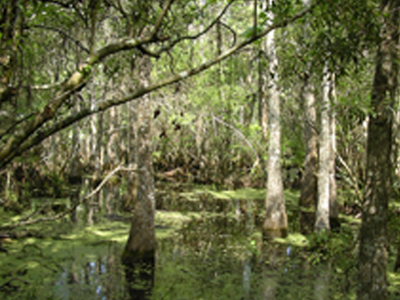 Jean Lafitte National Historical Park and Preserve protects significant examples of the rich natural and cultural resources of Louisiana's Mississippi River Delta region. The park, named after Jean Lafitte, seeks to illustrate the influence of environment and history on the development of a unique regional culture. The park consists of six physically separate sites and a park headquarters.

The preserve has trails and canoe tours through bottomland hardwood forests, swamps, and marsh. Additionally, there is an Education Center providing curriculum-based programming for school groups and a visitor center providing a film and exhibits. In Chalmette, six miles (10 km) southeast of New Orleans, is the Chalmette Battlefield and National Cemetery, site of the 1815 Battle of New Orleans and the final resting place for soldiers from the Civil War, Spanish-American War, World Wars I and II, and Vietnam.

Here's the our members favorite photos of "National Parks in Louisiana". Upload your photo of Jean Lafitte National Historical Park!