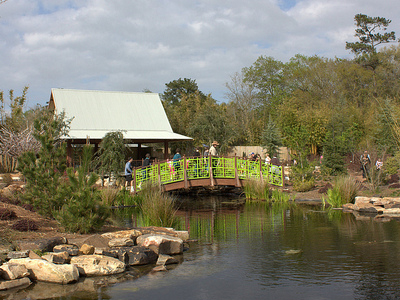 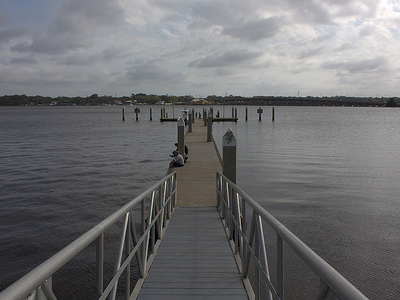 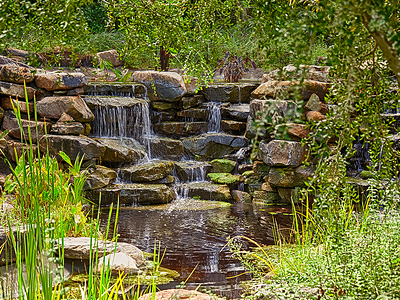 The Jacksonville Zoo and Gardens is a zoo located in Jacksonville. It sits at the mouth of the Trout River. The zoo occupies approximately 110 acres (45 ha) and has over 2,000 animals in its collection. The zoo has grown from its modest beginnings in Springfield to be considered one of the city's premiere attractions.

The zoo's marquee attraction is the Range of the Jaguar, which won the 2005 AZA Exhibit of the year award. The exhibits highlights animals native to Neotropical Rainforests. The zoo's other exhibits include the Plains of East Africa, highlighting African Savannah animals; Great Apes of the World, featuring 3 of the 4 Great Apes among other primates; the Australian Outback, including lorikeets, cassowarys, and kangaroos.

The zoo is active in animal conservation, participating in over 20 SSP (Species Survival Plans.) In 2004, the zoo reached an agreement with the nation of Guyana to help promote conservation in that country, particularly the Iwokrama Rainforest. Additionally, since 1999 the zoo has been home to a large breeding colony of woodstorks.

History
The Municipal Zoo opened in the Springfield neighborhood of Jacksonville, Florida on May 12, 1914. The first animal on exhibit was a red deer fawn. On July 19, 1925, the Zoo moved to a 37.5-acre (152,000 m2) site on the Trout River off Heckscher Drive in North Jacksonville. Over the course of the next forty years, the Zoo continued to grow in area and in terms of animals on display.

Perhaps the most significant animal in the Zoo's history was a jaguar named "Zorro." Zorro was a male, wild-born black (melanistic) jaguar that arrived at the Zoo in August, 1967. At that time, black jaguars were very rare in captivity. During Zorro's 19 years at the Zoo (he died in September, 1986) he fathered numerous kittens that were sent to other zoos across North America. In the spring of 2003, the Jax Zoo investigated and could not find a current North American captive born black jaguar that was not a descendant of Zorro.

By the end of the 1960s, the Zoo was reputed to have the largest collection of exotic animals in the Southeast, but it had fallen on hard times and a great deal of money was needed to save the zoo. Community leaders, under the direction of Mayor Hans Tanzler, appointed a seven member committee to search for an alternative to closing the Zoo.

List of animals
The first major exhibit that guests encounter. The exhibit is primarily viewed from an elevated walkway giving guests a bird's eye view of the animals. The exhibit was renovated and expanded in 1996.

Elephant Plaza
Offers an intimate view of the four African elephants at the zoo in their 275,000-gallon pool. The zoo is one of the few who house male elephants. The Zoo has a male African elephant named Ali, who was donated from Michael Jackson in 1997. The others are three females in age order: Moki, Chana, and Sheena.

Giraffe Overlook
A short distance away is the renovated giraffe exhibit. The covered boardwalk gives guests a breathtaking view across a replica of the African Savanna and guests can also get eye-to-eye with a giraffe. Drinks and giraffe food are sold at the overlook.

Children's Play Park
Phase one of the Jacksonville Zoo's 2.5-acre (10,000 m2) Play Park opened in May 2006 across from the Range of the Jaguar. The Play Park replaced the outdated Okovango Village which was demolished a year earlier. The exhibit includes a Splash Ground water park (open seasonally) for children, as well as an outdoor jungle gym and hedge maze. Animals featured include squirrel monkeys with themed activities for kids by their exhibit. This area iuncludes a barnyard area where children can pet farm animals like pygmy goats. The Discovery Center features educational programs for children.

Botanical Gardens
Savanna Blooms
This first Themed Pocket Garden was completed in spring 2005. Nestled beneath the Giraffe Overlook, visitors will find acacia groves that flank two entrances into the one-half acre garden. This unique garden, fashioned after a South African oasis, transitions from soft grasslands and fine textured acacia leaves at each entrance into a bold contemporary garden at its core. Kopje outcrops erupt from the landscape, and a weep trickles down the face of the rocks. The spring feeds a serene pool that showcases African water lilies and water edge plants. Visitors rest beneath the curved trellis laden with fragrant flowering vines and view the garden’s splendor from an internal vantage point.

Gardens of Trout River Plaza
In 2005-2007, the area encompassing the old Okovango Landing, as well as the children's play area was renovated. In September 2007, the $1.9 million Trout River Plaza botanical garden opened. The entire area - which also includes a grassy area named "The Lawn" which will be used for special events - encompasses 1.6 acres (6,500 m2). The heart of the new addition is the 1/4 acre garden space, partially walled with a fountain with an anhinga sculpture, flower beds and a lot of hardscape. There are columns topped with flowering plants, benches for seating, and a large patio area surrounding the fountain. Seven live oaks and other native trees - red maples, magnolias, and forest pansies - have been planted in the area around the garden to provide shade.

Here's the our members favorite photos of "Zoos in Jacksonville". Upload your photo of Jacksonville Zoo & Gardens!

Going to Jacksonville Zoo & Gardens? Get answers from our friendly locals