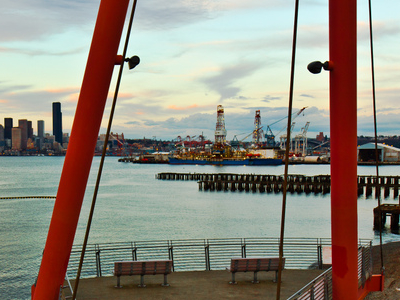 Jack Block Park is a 15-acre (6.1 ha) park in the West Seattle neighborhood of Seattle, Washington, USA. Situated on the northwest corner of the Port of Seattle's Terminal 5, the park offers public beach access, a children's play area, and a 45-foot (14 m) observation tower.The site of the park was previously occupied by a wood treatment plant and a shipbuilding facility, and the area was contaminated with creosote and designated a Superfund site by the U.S. Environmental Protection Agency in 1994.The park features a walking path along the Shoreline, which passes by a play area and a walkable pier before terminating at the park's observation tower.

Here's the our members favorite photos of "City Parks in Seattle". Upload your photo of Jack Block Park!

Going to Jack Block Park? Get answers from our friendly locals