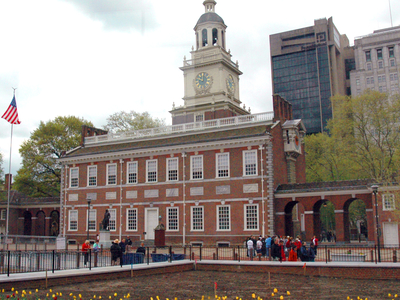 Independence National Historical Park is a United States National Historical Park in Philadelphia that preserves several sites associated with the American Revolution and the nation's founding history. Administered by the National Park Service, the 55-acre (22 ha)park comprises much of the downtown (or "Center City") historic district. The park has been nicknamed "America's most historic square mile" because of its abundance of historic landmarks, and the park sites are located within the Old City and Society Hill neighborhoods of Philadelphia.

Most of the park's historic structures are located in the vicinity of the four landscaped blocks between Chestnut, Walnut, 2nd, and 6th streets. The park also contains Franklin Court, the site of a museum dedicated to Benjamin Franklin and the United States Postal Service Museum. An additional three blocks directly north of Independence Hall, collectively known as Independence Mall, contain the Liberty Bell Center, National Constitution Center, Independence Visitor Center, and the former site of the President's House.

Usage As A Municipal Facility :
Despite its crucial role in the nation's founding, the site served most of its useful life as a municipal facility after the federal government relocated to the District of Columbia. The state government moved to Harrisburg in October 1812, and since there was little use for the Pennsylvania State House, the State of Pennsylvania considered selling it and dividing the State House Yard into building lots as early as 1802. The state came close to demolishing the hall in 1816. By 1818, the buildings had become surplus state property and were purchased by the City of Philadelphia, which used them uneventfully until late in the nineteenth century when the city government moved into a new city hall. In 1852, the Liberty Bell was removed from its steeple and put on public display within the "Declaration Chamber" of Independence Hall. Between 1885 and 1915, the Liberty Bell made seven trips by train to various expositions and celebrations until the city refused further requests.

Here's the our members favorite photos of "National Parks in Pennsylvania". Upload your photo of Independence National Historical Park!