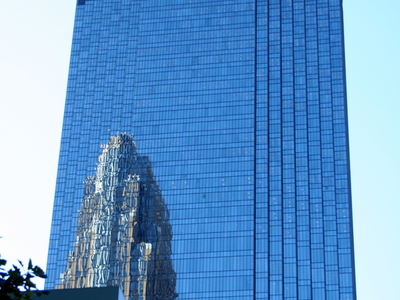 The IDS Center (80 S 8th St) is the tallest building in the state of Minnesota at 792 feet (241.4 m). Opened in 1974 as the IDS Centre, it stood 775 feet 6 inches (236.4 m), though a 16-foot (4.9 m) garage for window washing equipment was added at a later date. In 1992, the 776-foot (236.5 m) tall First Bank Place, now known as the Capella Tower, was completed nearby. However, it was advertised at the time as 774 feet (235.9 m) tall, one foot (0.3 m) shorter than the IDS "out of respect". A dispute eventually erupted in 2004–2005 and the rooftop garage is now included in the building's height, restoring it to first-place status in the city. Overall, the structure rises to 910 feet (277.4 m) when including communications spires on the roof, indisputably the highest points in the city. The IDS was constructed as the headquarters of Investors Diversified Services, Inc.—now Ameriprise Financial. It also housed the headquarters for the Target stores division of Dayton Hudson Corporation (now Target Corporation) from 1972 until Target moved to its own headquarters building in 2002.

The 57-story IDS became the tallest skyscraper in Minneapolis when it surpassed the height of the 30-story Foshay Tower in 1972 while under construction, ending that building's 43-year reign over the city skyline. Construction of the building was followed with great interest, and the topping-off ceremony was a major civic event in the city. Today, many high-rise buildings in Minneapolis echo design features of the IDS Center, particularly its sleek, modernistic glass facing.

A lobby and shopping area at the bottom of the tower is known as the Crystal Court, and provides skyway connections between the tower and the rest of downtown Minneapolis. On the Concourse level is Globe College and University. The building had an observation deck until it closed in 1983 and now rented by the law firm of Schwebel, Goetz & Sieben, P.A. A restaurant (Orion's Room) has been closed to the public since the beginning of 1994. Thousands of people came for one last visit on December 31, 1993. A public restaurant named Windows on Minnesota operated for several more years on the 50th floor. Windows on Minnesota now exists as a banquet space and is owned and operated by the Marquette Hotel, which is part of the IDS complex.

Here's the our members favorite photos of "Skyscrapers in Minneapolis". Upload your photo of IDS Center!

Going to IDS Center? Get answers from our friendly locals