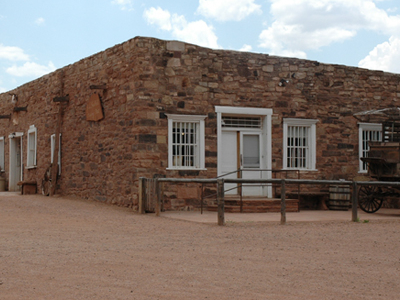 Hubbell Trading Post National Historic Site is a meeting ground of two cultures, the Navajo and settlers who came to the area to settle in what is now northeastern Arizona in the late 19th century. These settlers came from Mexico from the south and eastern United States. In 1878, John Lorenzo Hubbell purchased this trading post, ten years after Navajos were allowed to return to their homeland from their U.S.-imposed exile in Bosque Redondo, Fort Sumner, New Mexico. This ended what is known in Navajo history as the "Long Walk of the Navajo." The park is located in Ganado, Arizona. It was declared a National Historic Landmark in 1960.