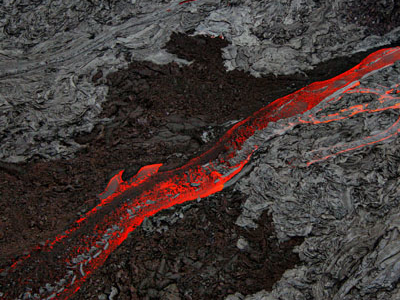 Hawai'i Volcanoes National Park, established in 1916, is a United States National Park located in the U.S. State of Hawai'i on the island of Hawai'i. It encompasses two active volcanoes: Kīlauea, one of the World's most active volcanoes, and Mauna Loa, the world's most massive Volcano. The park gives scientists insight into the birth of the Hawaiian Islands and ongoing studies into the processes of vulcanism.
For visitors, the park offers dramatic volcanic landscapes as well as glimpses of rare flora and fauna.

In recognition of its outstanding natural values, Hawaiʻi Volcanoes National Park was designated as an International Biosphere Reserve in 1980 and a World Heritage Site in 1987.In 2000 the name was changed by the Hawaiian National Park Language Correction Act of 2000 observing the Hawaiian spelling.

The park includes 323,431 acres (505.36 sq mi; 1,308.88 km2) of land.[5] Over half of the park is designated the Hawaii Volcanoes Wilderness area and provides unusual hiking and camping opportunities. The park encompasses diverse environments that range from sea level to the summit of the Earth's most massive volcano, Mauna Loa at 13,677 feet (4,169 m). Climates range from lush tropical rain forests, to the arid and barren Kaʻū Desert.
Active eruptive sites include the main caldera of Kīlauea and a more active but remote vent called Puʻu ʻŌʻō.
The main entrance to the park is from the Hawaii Belt Road. The Chain of Craters Road, as the name implies, leads past several craters from historic eruptions to the coast. It used to continue to another entrance to the park near the town of Kalapana, but that portion is now covered by a lava flow.
Hawaii Volcanoes National Park Historic Places:
Several of the National Register of Historic Places listings on the island of Hawaii are located within the park:

Here's the our members favorite photos of "National Parks in Pahala". Upload your photo of Hawaii Volcanoes National Park!

Going to Hawaii Volcanoes National Park? Get answers from our friendly locals