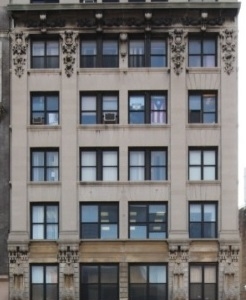 The Haffen Building is a historic New York City landmark constructed in 1901-1902 in the neighborhood of North New York (presently associated as Mott Haven), Bronx, New York. The building is located at 2804 Third Avenue, also addressed as 507 Willis Avenue, in the middle of a triangular block between 148th Street, 147th Street, Third Avenue, and Willis Avenue, within the Hub business district. It was inspired by the economic growth and upper middle-class status that was prevalent in the area during the period. When constructed, the IRT Third Avenue Elevated train and the IRT Second Avenue train passed and stopped in front of it, making station between 148th Street and 149th Street.

Matthias Haffen was a member of the prominent Haffen family, founders of the famous Haffen Brewing Company. As an active real estate developer, he wanted to erect a first-class office building for banking and professional tenants. He turned to then Bronx Commissioner of Buildings, architect Michael J. Garvin, who had been working with Mathias' brother, then Bronx Borough President Louis F. Haffen. Mathias sought Garvin's experience with the area. The two, with Garvin's design, created the Haffen Building, a seven story Beaux-Arts style office complex.

For over a century, the Haffen Building housed several banks, law offices, and governmental agencies. Notable occupants have been the Knickerbocker Trust Company (with the next door Hub Center Building at 2810 Third Avenue also addressed as 509 Willis Avenue), the Dollar Savings Bank of New York City, the National Puerto Rican Day Parade, Inc.; and the law offices of Javier A. Solano. The building is currently regarded as a "distinct structure" which "is an outstanding and remarkably intact example of Beaux-Arts aesthetic.

Here's the our members favorite photos of "Landmarks near Bronx". Upload your photo of Haffen Building!

Going to Haffen Building? Get answers from our friendly locals

Love landmarks? Check these out;

Top Voted Landmarks Around the World