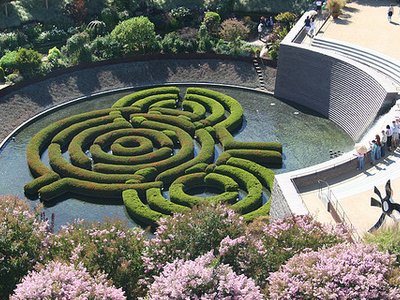 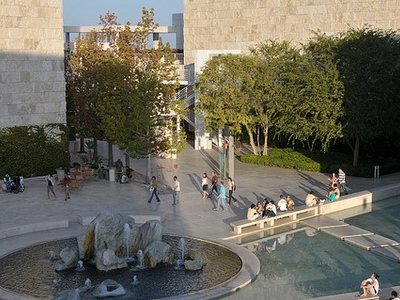 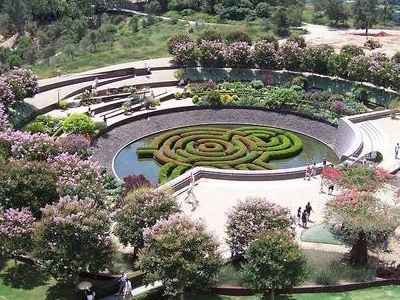 The Getty Center, in Los Angeles, California, is a campus of the Getty Museum and other programs of the Getty Trust. The $1.3 billion Center opened to the public on December 16, 1997 and is well known for its architecture, gardens, and views overlooking Los Angeles. The Center sits atop a hill connected to a visitors' parking garage at the bottom of the hill by a three-car, cable-pulled hovertrain funicular. Located in the Brentwood neighborhood of Los Angeles, the Center is one of two locations of the J. Paul Getty Museum and draws 1.3 million visitors annually. (The other location is the Getty Villa in the Pacific Palisades neighborhood of Los Angeles, California.)

The Center branch of the Museum features pre-20th-century European paintings, drawings, illuminated manuscripts, sculpture, and decorative arts; and 19th- and 20th-century American, Asian, and European photographs. In addition, the Museum’s collection at the Center includes outdoor sculpture displayed on terraces and in gardens and the large Central Garden designed by Robert Irwin. Among the artworks on display is the Vincent Van Gogh painting Irises.

Museum
The J. Paul Getty Museum's estimated 1.3 million visitors annually make it one of the most visited museums in the United States. The collection of the J. Paul Getty Museum on display at the Getty Center includes "pre-20th-century European paintings, drawings, illuminated manuscripts, sculpture, and decorative arts; and 19th- and 20th-century American and European photographs". The paintings include:

Getty's extensive photograph collection is located on the lower level of the west pavilion.
The Museum building consists of a three-level base building that is closed to the public and provides staff workspace and storage areas. Five public, two-story towers on the base are called the North, East, South, West and the Exhibitions Pavilions. The Exhibitions Pavilion acts as the temporary residence for traveling art collections and the Foundation's artwork for which the permanent pavilions have no room. The permanent collection is displayed throughout the other four pavilions chronologically: the north houses the oldest art while the west houses the newest. The first-floor galleries in each pavilion house light-sensitive art, such as illuminated manuscripts, furniture, or photography. Computer-controlled skylights on the second-floor galleries allow paintings to be displayed in natural light. The second floors are connected by a series of glass-enclosed bridges and open terraces, both of which offer views of the surrounding hillsides and central plaza. Sculpture is also on display at various points outside the buildings, including on various terraces and balconies. The lower level (the highest of the floors in the base) includes a public cafeteria, the terrace cafe, and the photography galleries.

Central Garden
The 134,000-square-foot (12,400 m2) Central Garden at the Getty Center is the work of artist Robert Irwin. Planning for the garden began in 1992, construction started in 1996, and the garden was completed in December 1997. Irwin was quoted as saying that the Central Garden "is a sculpture in the form of a garden, which aims to be art." Water plays a major role in the garden. A fountain near the restaurant flows toward the garden and appears to fall into a grotto on the north garden wall. The resulting stream then flows down the hillside into the azalea pool. The designers placed rocks and boulders of varying size in the stream bed to vary the sounds from the flowing water. A tree-lined stream descends to a plaza, while the walkway criss-crosses the stream, which continues through the plaza, and goes over a stone waterfall into a round pool.[33] A maze of azaleas floats in the pool, around which is a series of specialty gardens. More than 500 varieties of plant material are used for the Central Garden, but the selection is "always changing, never twice the same".

After the original design, an outdoor sculpture garden, called the "Lower Terrace Garden" was added in 2007 on the west side of the central garden just below the scholar's wing of the GRI building.

Getty Research Institute (GRI)
The Getty Research Institute (GRI) is "dedicated to furthering knowledge and advancing understanding of the visual arts." Among other holdings, GRI's research library contains over 900,000 volumes of books, periodicals, and auction catalogs; special collections; and two million photographs of art and architecture. GRI's other activities include exhibitions, publications, and a residential scholars program. At the Getty Center, GRI is located to the west of the Museum. The round building encircles a landscaped garden and is located to the west of the central garden. The main entrance of GRI is connected by a terrace to the main arrival court of the Museum, with outdoor sculptures placed along the route. GRI has one art gallery on its entrance level that is open to the public.

Preparation for natural disasters
Earthquakes
Although the Center's site was thought to have little motion during earthquakes, which are frequent in the Los Angeles area, in 1994, as the Center was being constructed, the Northridge earthquake struck. It caused "disturbing hairline cracks... in the welds and plated joints of the steel framework."As a result, the steelwork through the site was retrofitted. The Center's buildings are thought to be able to survive an earthquake of 7.5 magnitude on the Richter scale.

Fires
In the 16 electrical transformers at the Center, silicone fluid is used as a coolant "with less risk of ignition" than hydrocarbon coolant. The native flammable chaparral was removed and fire-resistant poverty Weed was added to the slopes around the Center. Each year, a herd of goats is rented to clear Brush on the surrounding hills. At the north end of the Center, a tank with 1,000,000 US gal (3,800,000 l) of water, together with a grass-covered helipad, allow helicopters to collect water. The access ramp from the entry plaza to the Museum was constructed to allow a fire truck to pass over it. Inside the Museum, the sprinkler system is designed to balance "between the potential damage of a fire and the risk of water damage to valuable artwork".

Here's the our members favorite photos of "Museums in Los Angeles". Upload your photo of Getty Center!

Going to Getty Center? Get answers from our friendly locals

Connect with Adam Blevins and Dieine Geanine who are looking to visit Getty Center.