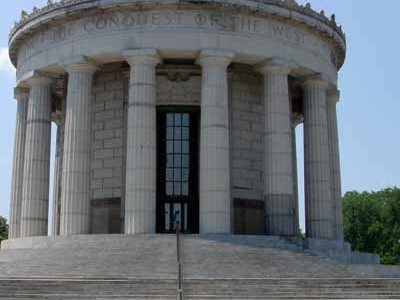 In a celebrated campaign, Lieutenant Colonel George Rogers Clark, older brother of William Clark, and his frontiersmen captured Fort Sackville and British Lt. Governor Henry Hamilton on February 25, 1779. The heroic march of Clark's men from Kaskaskia on the Mississippi River in mid-winter and the subsequent victory over the British remains one of the great feats of the American Revolution.In 1966 Indiana transferred the site to the National Park Service. Adjacent to the memorial there is a visitor center where one can see interpretive programs and displays. The center is located on South 2nd Street in Vincennes.