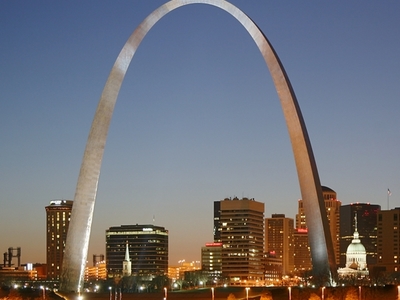 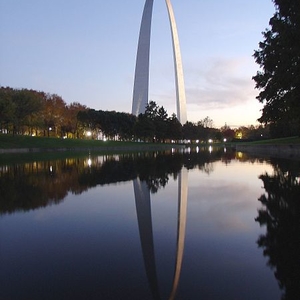 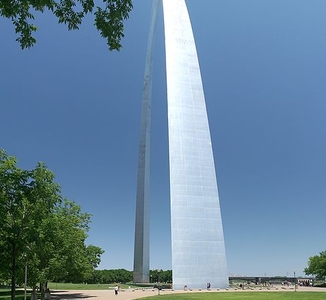 The Gateway Arch, or Gateway to the West, is an arch that is the centerpiece of the Jefferson National Expansion Memorial in St. Louis, Missouri. It was built as a monument to the westward expansion of the United States. At 630 feet (192 m), it is the tallest man-made monument in the United States,Missouri's tallest accessible building, and the largest architectural structure designed as a weighted or flattened catenary arch.

The arch is located at the site of St. Louis' foundation, on the West Bank of the Mississippi River where Pierre Laclède, just after noon on February 14, 1764, told his aide, Auguste Chouteau, to build a city. The Gateway Arch was designed by Finnish American architect Eero Saarinen and structural engineer Hannskarl Bandel in 1947. Construction began on February 12, 1963, and ended on October 28, 1965, costing US$13 million at the time (approximately $90,500,000 today). The monument opened to the public on June 10, 1967.

Lighting:
The first proposal to illuminate the arch at night first was announced on May 18, 1966, but the plan never came to fruition. In July 1998, funding for an arch lighting system was approved by St. Louis' Gateway Foundation, which agreed to take responsibility for the cost of the equipment, its installation, and its upkeep. In January 1999, MSNBC arranged a temporary lighting system for the arch so the monument could be used as the background for a visit by Pope John Paul II. Since November 2001, the arch has been bathed in white light between 10 p.m. and 1 a.m. via a system of floodlights. Designed by Randy Burkett, it comprises 44 lighting fixtures situated in four pits just below ground level.

Public access:
In April 1965, three million tourists were expected to visit the arch after completion; 619,763 tourists visited the top of the arch in its first year open. On January 15, 1969, a visitor from Nashville, Tennessee became the one-millionth person to reach the observation area; the ten-millionth person ascended to the top on August 24, 1979. In 1974, the arch was ranked fourth on a list of "most-visited man-made attraction". Currently, the Gateway Arch is one of the most visited tourist attractions in the World with over four million visitors annually, of which around one million travel to the top. The arch was listed as a National Historic Landmark on June 2, 1987, and is also listed on the National Register of Historic Places.

The center houses offices, mechanical rooms, and waiting areas for the arch trams, as well as its main attractions: the Museum of Westward Expansion and two theaters displaying films about the arch. The older theater opened in May 1972; the newer theater, called the Odyssey Theatre, was constructed in the 1990s and features a four-story-tall screen. Its construction required the expansion of the underground complex, and workers had to excavate solid rock while keeping the disruption to a minimum so the museum could remain open. The museum houses several hundred exhibits about the United States' westward expansion in the 19th century and opened on August 10, 1977.

Observation area:
Near the top of the arch, passengers exit the tram compartment and climb a slight grade to enter the arched observation area. There are 32 windows (16 per side), each measuring 7 by 27 inches (180 mm × 690 mm) and allowing views across the Mississippi River and southern Illinois with its prominent Mississippian culture mounds to the east at Cahokia Mounds, as well as the city of St. Louis and St. Louis County to the west beyond the city. The observation deck, 65 feet (20 m) long and 7 feet (2.1 m) wide, has a capacity of about 160 passengers—the capacity of four trams. On a clear day, one can see up to 30 miles (48 km) from atop the arch.

Safety and security:
On June 16, 1965, the Federal Aviation Administration cautioned that aviators who flew between the legs of the arch would be fined and their licenses revoked; however, at least ten pilots have disobeyed this order, with the first occurrence on June 22, 1966. In 1973, Nikki Caplan was granted an FAA exception to fly a hot air balloon between the arch's legs as part of the Great Forest Park Balloon Race. The St. Louis park director accompanied her on the flight as the balloon hit the arch and plummeted 70 feet at one point.

Symbolism and culture:
Built as a monument to the westward expansion of the United States, the arch typifies "the pioneer spirit of the men and women who won the West, and those of a latter day to strive on other frontiers." The arch has become the iconic image of St. Louis, appearing in many parts of city culture. In 1968, three years after the monument's opening, the St. Louis phone directory contained 65 corporations with "Gateway" in their title and 17 with "Arch".

Arches also appeared over gas stations and drive-in restaurants. In the 1970s, a local sports team adopted the name "Fighting Arches". Robert S. Chandler, an NPS superintendent, said, "Most [visitors] are awed by the size and scale of the Arch, but they don't understand what it's all about.... Too many people see it as just a symbol of the city of St. Louis."

Here's the our members favorite photos of "Monuments in St. Louis". Upload your photo of Gateway Arch!

Going to Gateway Arch? Get answers from our friendly locals

Get in touch with 1 Touristlink members who want to visit Gateway Arch or with Josh Verge, Brent Cole and 2 others who already have been here.