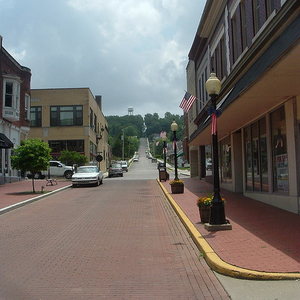 French Lick is a town in French Lick Township, Orange County, Indiana, United States. The population was 1,807 at the 2010 census. In early 2006 the French Lick Resort Casino, the state's tenth casino in the modern legalized era, opened drawing national attention to the small town. French Lick was originally a French trading post built near a spring and salt lick. A fortified ranger post was established near the springs in 1811. On Johnson's 1837 map of Indiana, the community was known as Salt Spring. The town was founded in 1857.

Here's the our members favorite photos of "Towns & Villages in Jasper". Upload your photo of French Lick!

Going to French Lick? Get answers from our friendly locals