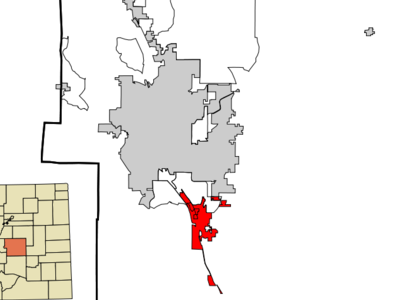 The city of Fountain is a Home Rule Municipality located in El Paso County, Colorado, United States. Fountain is located just ten miles (16 km) south of Colorado Springs and just east of Fort Carson. Fountain and the Colorado Springs suburbs Security and Widefield make up the "Fountain Valley" community. According to 2006 Census Bureau estimates, the population of the city is 19,081. In 1999, Fountain was chosen as "America's Millennium City" by the New York Times based on the city's proximity to national census statistics and qualitative research on what American life was actually like at the end of the 20th century. Fountain was named an "All-America City" in 2002 by the National Civic League. The city is the home of Pikes Peak International Raceway.

Here's the our members favorite photos of "Cities in Colorado". Upload your photo of Fountain!

Going to Fountain? Get answers from our friendly locals