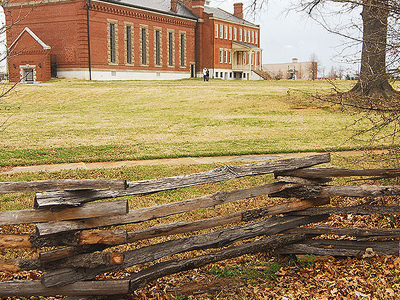 Fort Smith National Historic Site is a United States National Historic Site located primarily in Fort Smith, Arkansas along the Arkansas River, and also along the opposite bank of the river near Moffett, Oklahoma. The site was established in 1961 in order to protect the remains of two 19th-century U.S. military forts, including a building which once housed the United States District Court for the Western District of Arkansas. Fort Smith was also notable as a major stop along the "Trail of Tears." It was designated a National Historic Landmark in 1960.
The park visitor center is now located in the old Barracks/Courthouse/Jail building. Exhibits in the visitor center focus on Fort Smith’s military history from 1817–1871, western expansion, Judge Isaac Parker and the federal court's impact on Indian Territory, U.S. Deputy Marshals and outlaws, Federal Indian policy, and Indian Removal including the Trail of Tears.

Here's the our members favorite photos of "National Parks in Oklahoma". Upload your photo of Fort Smith National Historical site!