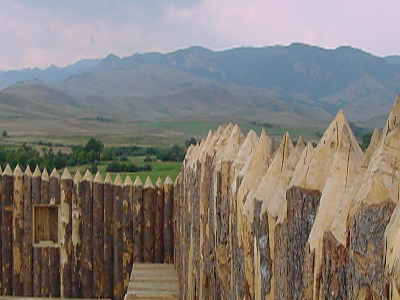 Named for a popular Union general killed in the Civil War, Fort Phil Kearny was established at the forks of the Big and Little Piney Creeks by Col. Henry B. Carrington of the 18th U.S. Infantry in July, 1866. The Mission of this fort and two other posts along the Bozeman Trail--Forts Reno and C.F. Smith--was three- fold: to protect travelers on the Trail; to prevent intertribal warfare between Native Americans in the area; and to draw attention of Indian forces opposed to Euro- American westward expansion away from the trans-continental railroad construction corridor to the south.


Fort Phil Kearny State Historic Site is located just 20 miles south of Sheridan on Interstate 90, Exit 44. At the Fort location the visitor will find an interpretive center with exhibits, videos, bookstore, and self-guided tours of the fort and outlying sites. The fort tour leads the visitor through the site to building locations, archaeological remains, and interpretive signs pinpointing the surrounding historic landmarks. A Civilian Conservation Corp Cabin has been refurbished to depict the quarters of an Officer’s wife and a Non-Commissioned Officer’s Quarters. In addition to the historic interpretation, this site provides three picnic areas and a restroom for visitor use.

Here's the our members favorite photos of "Forts in Clearmont". Upload your photo of Fort Phil Kearny State Historic Site!