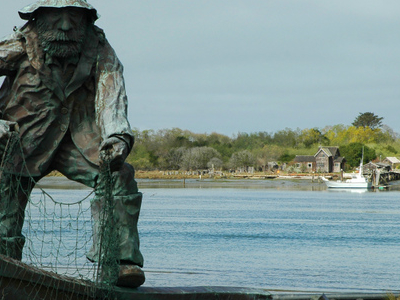 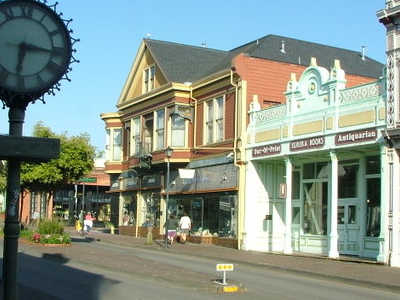 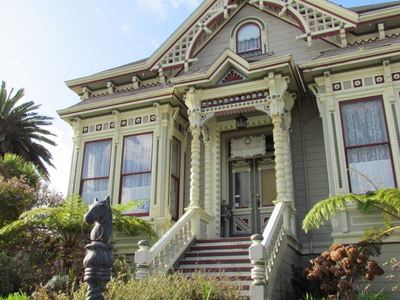 Eureka, the principal city and county seat of Humboldt County, California, is located adjacent to Humboldt Bay 270 miles (430 km) north of San Francisco and 100 miles (160 km) south of the Oregon border on U.S. Route 101. At the 2010 census, the population of the city was 27,191 and the population of Greater Eureka was 45,034. Eureka is the largest city north of San Francisco situated on the Pacific Ocean in the Continental United States. The city is the regional center for government, health care, trade, and the arts for the Redwood Empire region of California north of the San Francisco Bay Area. As a port city, its facilities include marinas and industrial docking facilities, making it the largest deep water port between San Francisco and Coos Bay, a distance of about 500 miles. As the primary full-service city situated between the most extensive preserves of the World's tallest trees, the Coast Redwoods, and related parks, Eureka is the site of the headquarters for both the North Coast Redwoods District of the California State Parks System and the one million acre Six Rivers National Forest. The city, which played a major role in the historic west coast lumber trade, is the site of hundreds of significant Victorian homes, including the nationally recognized Carson Mansion, situated at the head of its Old Town Historic District. Eureka is also home to California's oldest zoo, the Sequoia Park Zoo.

Fishing, shipping, and boating:
Eureka's founding and livelihood was and remains linked to Humboldt Bay, the Pacific Ocean, and related industries, especially fishing. Salmon fisheries sprang up along the Eel River as early as 1851, and within seven years, 2,000 barrels of cured fish and 50,000 pounds of smoked salmon were processed and shipped out of Humboldt Bay annually, primarily from processing plants on Eureka's waterfront, which exist to this Day. By 1858 the first of many ships built in Eureka was launched, beginning an industry that spanned scores of years. The bay is also the site of the west coast's largest Oyster farming operations, which began its commercial status in the nineteenth century. The Bay remains the home port to more than 200 fishing boats in two modern marinas which can berth at least 400 boats within the city limits of Eureka.

Economy:
The economic base of the city was originally founded on timber and fishing and supplying gold mining efforts inland. Gold mining diminished quickly in the early years and activities of timber and fishing have also diminished, especially in the latter decades of the twentieth century. Today, the major industries are tourism, timber (in value), and healthcare and services (in number of jobs). Major employers today in Eureka include the following governmental entities: College of the Redwoods, The County of Humboldt, and the Humboldt County Office of Education. St. Joseph Hospital in Eureka is now the largest private employer in Eureka.

The 2000 U.S. Census indicates that 3.7% of the employed civilian population 16 years and over (totaling 20,671) worked in agriculture, forestry, fishing, and hunting industries. This percentage may not be indicative of the actual number of people in these professions as many are self-employed, especially in the fishing industry. The 2000 U.S. Census reported that 24.9% of the community worked in education, health care, and social services. Another 18.4% were employed by the government, while self-employed workers totaled 11.2% of all workers. The unemployment rate in 2000 was 5.5% compared to the national average of 5.7% (calculated by dividing the unemployed population by the labor force). For the population 16 years and older, 42.7% were not in the labor force, while 57.3% were employed. According to the 2000 U.S. Census, in 1999 the median household income was $25,849 and the per capita income was $16,174. Inhabitants whose income was below poverty level in 1999 were 23.7% of the population. Of the 11,637 housing units in 2000, 94.2% of the housing units were occupied, while 5.8% were vacant. Of the occupied housing units, 46.5% were owner occupied and 53.5% were renter occupied.

Land:
U.S. Route 101 is the major north and south highway, which connects Eureka to the rest of the North Coast region. The highway connects to Oregon, located approximately 100 miles to the north, and San Francisco, over 250 miles to the south. The highway follows city streets through the city, with flow and cross-traffic controlled by traffic signals. Highway 101 enters Eureka from the south as Broadway. As it reaches the downtown area, it splits into a one-way couplet composed of 4th Street and 5th Street. On the northern side of the city, northbound and southbound rejoin at the Northeast side before this major becomes an expressway (to Arcata and points beyond) as double bridges cross the Eureka Slough (mouth of the Freshwater Creek).
State Route 255 is an alternate route of U.S. 101 between Eureka and the nearby city of Arcata, running along the western shore of Humboldt Bay. It begins in the downtown area at U.S. 101 and proceeds up R Street towards the Samoa Bridge and the community of Samoa.
State Route 299 (formerly U.S. Route 299) connects to U.S. Route 101 at the northern end of Arcata. Route 299 begins at that point and extends easterly to serve as the major traffic artery to the east for Eureka.

Air:
Eureka's full service airport is the Arcata-Eureka Airport, located 15 miles (24 km) north in McKinleyville. Murray Field and Eureka Municipal Airport, are general aviation airports for private and charter air service, and are both located adjacent to Humboldt Bay either at the edge of Eureka or just outside the city limits. Ten miles southeast of Eureka, Kneeland Airport, also a general aviation airport, at 2,737 ft (834.2 m) elevation, provides an option for pilots choosing to land when the prevalent marine layer is affecting airports nearer sea level.

Water:
The Humboldt Bay Harbor Recreation & Conservation District manages the resources of Humboldt Bay and its environs, including the deep water port. The port is located directly west of the city and is serviced across the bay in the community of Samoa. In addition to two deep water channel docks for large ships, several modern small craft marinas are available for private use, with a total capacity of more than 400 boats.

Education:
Institutions of higher learning include the College of the Redwoods located on the south edge of the Greater Eureka Area and Humboldt State University, located just eight miles (13 km) north in Arcata. College of the Redwoods manages a downtown satellite campus to augment offerings of the 270-acre (1.1 km2) campus located south of the city. In 2005 Humboldt State University made public its plans to bring the campus to Eureka and in the spring 2007 opened of the HSU Humboldt Bay Aquatic Center, a $4.5 million aquatic facility, on Humboldt Bay in Old Town Eureka. Other plans include a new HSU Bay and Estuarine Studies Center, to be placed on the bay. This new facility will be closer to the Coral Sea (now docked at Woodley Island, Eureka), HSU's floating classroom. The new facility would be considerably larger than other existing facilities in Trinidad, twenty miles (32 km) north.

Eureka City Schools, the largest school district in the region, administers the public schools of the city. Eureka High School receives all students from city grammar schools as well as all those from nearby unincorporated communities. Specific Schools within the city limits include: Alice Birney Elementary, Grant Elementary, Lafayette Elementary, Washington Elementary, Zane Middle School, Eureka High School, Humboldt Bay High School, Winship Campus (including Zoe Barnum High School and the Eureka Adult School), and Winzler Children's Center. The District offices are located in the remodeled Marshall School, which also contains the Marshall Family Resource Center, a sight designed to offer programs in support of parents and families. Offices of the administration of the Superintendent of Humboldt County Schools are located in the rebuilt/repurposed Franklin Elementary School site in the city of Eureka. Humboldt County Schools Office of Education (HCSOE) administers the Glen Paul Center in Eureka, which specializes in the education of children with special education needs, from ages 3–22

Museums and galleries:
Museums include the Clarke Historical Museum, the Humboldt Bay Maritime Museum in nearby Samoa (which operates the Madaket, an historic excursion boat operating on the bay), the Morris Graves Museum of Art, HSU First Street Gallery, Discovery Museum for Children, and the Blue Ox Mill. A collection of logging equipment spanning 150 years and other cultural assets abound in and around museums at Fort Humboldt State Historic Park.

Parks and recreation:
Sequoia Park Zoo, situated on more than 67 acres (270,000 m2) of mature second-growth Redwood forest, includes Eureka's largest public playground and a duck pond in addition to meticulously kept gardens and examples of the area's many varieties of rhododendron bushes. The City of Eureka Recreation Department manages 13 playgrounds, including Cooper Gulch, which is 33 acres, and many ball fields as well as tennis courts and others, including basket ball and soccer. Other parks in or near Eureka include the Humboldt Botanical Garden and the Humboldt Bay National Wildlife Refuge, and the Eureka Marsh, an accessible protected marsh between the Bayshore Mall and Humboldt Bay. There is a modern boardwalk along the city's waterfront and two large marinas capable of mooring over 400 small craft.

Here's the our members favorite photos of "Cities in California". Upload your photo of Eureka!

Going to Eureka? Get answers from our friendly locals