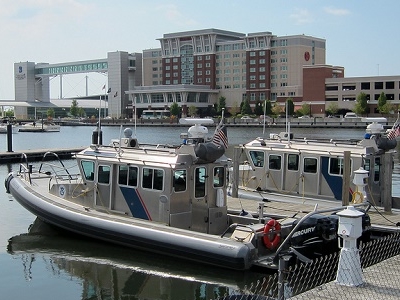 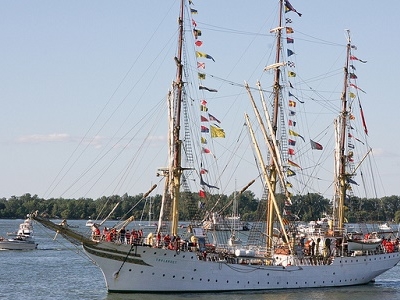 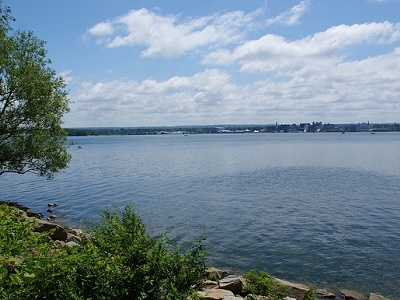 Erie is a city located in northwestern Pennsylvania in the United States. Named for the lake and the Native American tribe that resided along its southern shore, Erie is the state's fourth-largest city (after Philadelphia, Pittsburgh and Allentown), with a population of 102,000. Erie's Metropolitan Area consists of approximately 280,000 residents and an Urbanized Area population of approximately 195,000. The city is the seat of government for Erie County.

Erie is near Buffalo, New York, Cleveland, Ohio, and Pittsburgh, Pennsylvania. Once teeming with heavy industry, Erie's manufacturing sector remains prominent in the local economy, though service industries, healthcare, higher education, and tourism are emerging as greater economic drivers. Millions visit Erie for recreation at Presque Isle State Park, as well as attractions like casino and horse racetrack named for the state park. Erie is known as the Flagship City because of its status as the home port of Oliver Hazard Perry's flagship Niagara. The city has also been called the Gem City because of the "sparkling" lake. Erie won the All-America City Award in 1972. Erie, Pennsylvania is also colloquially nicknamed "The City by the Bay", due to its location on Presque Isle Bay of Lake Erie.

Economy:
Erie is the Commonwealth of Pennsylvania's primary access point to Lake Erie, the Great Lakes, and the Saint Lawrence Seaway. The city emerged as a maritime center after the American Revolution, then as a railroad hub during the great American westward expansion. Erie became an important city for iron and steel manufacturing during the Industrial Revolution and thrived well into the 20th century with big industry. While only diesel-electric locomotive building remains from the ranks of the large manufacturers in the early 21st century, a more diverse mix of mid-sized industries has emerged. This broader economic base includes not only smaller and more agile steel and plastic plants, but also a vigorous service sector: health, insurance and tourism. As of December 2010, Erie's unemployment rate was 8.9 percent, as compared to rates for Pennsylvania and the United States at 8.5 and 9.4 percent, respectively.

Erie is the corporate headquarters of GE Transportation, the Erie Insurance Group, and Marquette Savings Bank. Lord Corporation was founded and has major operations in Erie. Along with GE and Erie Insurance, major employers in the county, and consquenetly, the city include the County, State and Federal governments, as well as the Erie City School District. Over 10 percent of the USA's plastics are manufactured or finished in Erie-based plastics plants. Erie is an emerging center for biofuels and environmental research, producing over 45 million U.S. gallons of biofuel a year. Tourism plays an increasingly important role in the local economy with over 4 million people visiting Presque Isle State Park and other attractions. Shoppers from Ohio, New York, and the Canadian province of Ontario frequent the Millcreek Mall and Peach Street stores and attractions as a result of Pennsylvania's tax exemption on clothing. Both Hamot Medical Center and Saint Vincent Health System are also major employers in Erie. On February 1, 2011, Hamot merged with the University of Pittsburgh Medical Center and became UPMC Hamot. The United States Department of Veterans Affairs operates the Erie Veterans Affairs Medical Center on East 38th Street. The Shriners International operates Shriners Hospital for Children in Erie since 1927.

Recreation:
Erie's location along the shores of Lake Erie provides a plethora of outdoor activities throughout the year. The region's largest attraction is Presque Isle State Park, drawing over four million visitors a year. The region grows grapes and produces the third largest amount of wine in the United States. Aerial view of Presque Isle State Park. View is to the east-northeast. Downtown Erie is surrounded by Presque Isle State Park, a National Natural Landmark. The Seaway Trail runs through downtown Erie along the lakefront. The Tom Ridge Environmental Center, at the foot of Presque Isle, features 7,000 square feet (650 m2) of exhibit space. Other tourist destinations include the Bayfront Convention Center; the Bicentennial Tower that overlooks Lake Erie; Dobbins Landing, a pier in downtown Erie; the Erie Land Light, and the Erie Maritime Museum, the home port of the Niagara. The 2,600,000-square-foot (240,000 m2) Millcreek Mall, one of the largest shopping malls in the United States, is located on Peach Street in nearby Millcreek Township. The indoor waterpark Splash Lagoon, in Summit Township, is the largest indoor waterpark on the East Coast and third largest in the United States. Waldameer Park, located at the base of Presque Isle, is the fourth oldest amusement park in Pennsylvania, and the tenth oldest in the United States.

Erie is home to several colleges and universities. Penn State Erie, The Behrend College is the largest Penn State branch campus, becoming a 4 year school in 1973. Lake Erie College of Osteopathic Medicine (LECOM), a large medical school, with branch campuses in Bradenton, Florida and Greensburg, Pennsylvania, has one of the largest enrollments of medical students in the country. Other notable colleges in the Erie area include Gannon University, a Catholic university, situated in downtown Erie. Another Catholic institution, Mercyhurst University, is in the southeast part of the city. Edinboro University Of Pennsylvania, part of the state system of higher education, is in nearby Edinboro, Pennsylvania. Additionally, Allegheny College is located in Meadville, south of Erie.

Ranking Erie city and county officials, as well as officials of the Erie School District, began looking into the need for a community college in the Erie area in 2006. As of January 2008, county officials and representatives of Penn State-Behrend, Mercyhurst and Gannon were in serious discussions expected to lead to the creation of Northwest Pennsylvania Community College by September 2009. Besides accreditation issues, officials must resolve whether to use local four-year educational institutions or to build a separate site in Summit Township for community college classes.

Transportation:
Erie is well connected to the Interstate Highway System. There are six "Erie exits" along Interstate 90, a major cross-country thoroughfare running from Boston to Seattle. Erie is the northern terminus of Interstate 79, which travels south to Pittsburgh and, ultimately, West Virginia. The western terminus for Interstate 86, also called the "Southern Tier Expressway," is at Interstate 90 between Erie and North East, Pennsylvania. Interstate 86 continues east through New York to Binghamton. The Bayfront Connector runs from Interstate 90 in Harborcreek to the Bayfront Parkway and downtown Erie, along the east side of the city, then connects to Interstate 79 on the west side of the city. Major thoroughfares in the city include 12th Street, 26th Street, 38th Street and Peach Street. Peach is also a part of U.S. Route 19, whose northern terminus is in Erie and continues south eventually reaching the Gulf of Mexico. Other major routes running through Erie are Pennsylvania Route 5, known as the Seaway Trail and is made up of parts of 6th Street, 8th Street, 12th Street, and East Lake Road in the city, U.S. Route 20, which is 26th Street in the city. The city is divided between east and west by State Street.

The Erie Metropolitan Transit Authority (EMTA) operates the city's transit bus system, known as the 'e'. Buses run seven days a week in the city, with trips out to other parts of the county occurring a couple times a week. Intercity buses providing transportation between Buffalo, Cleveland and Pittsburgh are operated by Greyhound Lines. Service between Buffalo and Cleveland is also provided by Lakefront Lines. Both companies operate out of the Intermodal Transportation Center, which opened in 2002 at the foot of Holland Street. The former "Water Level Route" of the New York Central Railroad travels directly through Erie. It is now the mainline for CSX freight trains. The mainline of the Norfolk Southern Railway, originally built by the Nickel Plate Railroad, also travels through Erie. At one time Norfolk Southern trains ran down the middle of 19th Street, but were removed in 2002. Passenger rail service is provided by Amtrak's Lake Shore Limited out of Union Station at 14th and State Streets. The Lake Shore Limited stops twice daily—one eastbound towards New York City, and one westbound towards Chicago.

Here's the our members favorite photos of "Towns & Villages in Pennsylvania". Upload your photo of Erie!

Going to Erie? Get answers from our friendly locals