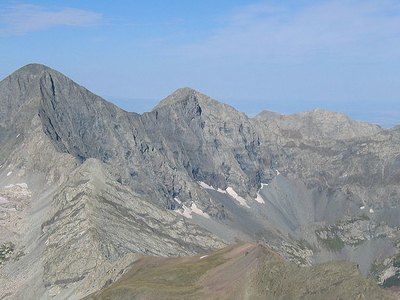 Ellingwood Point, or Ellingwood Peak, is a fourteener in the U.S. state of Colorado. It is located at the southern end of the Sangre de Cristo Range, approximately 1/2 mile (1 km) northwest of Blanca Peak. It lies on the border between Alamosa County and Huerfano County. It is named for Albert Russell Ellingwood, an early pioneer of climbing in the Western United States and in Colorado in particular.

Ellingwood Point only barely qualifies as an independent peak under the 300-foot (91 m) topographic prominence cutoff which is standard in Colorado. It is also quite close to its parent peak, Blanca Peak. Hence its inclusion in fourteener lists has been somewhat controversial. However most authorities do consider it a true fourteener. Because of its proximity to Blanca Peak, it is often climbed together with that peak in a single day.

Here's the our members favorite photos of "Peaks or Summits in Alamosa". Upload your photo of Ellingwood Point!

Going to Ellingwood Point? Get answers from our friendly locals

Peaks or Summits near Alamosa

Peaks or Summits in Colorado