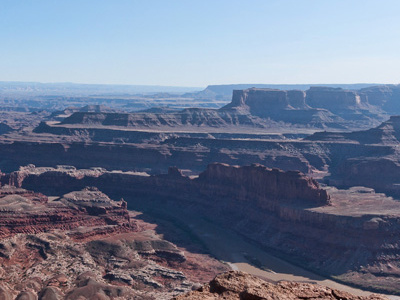 Dead Horse Point State Park is a state park of Utah, USA, featuring a dramatic overlook of the Colorado River and Canyonlands National Park. The park is so named because of its use as a natural corral by cowboys in the 19th century. The park covers 5,362 acres (21.70 km2) of high desert at an altitude of 5,900 feet (1,800 m).
The park has several overlooks, a visitor center, a 21-site campground and a group campsite, one picnic area, and a 9-mile (14 km) loop hiking trail with two cutovers to allow shorter trips. Safety concerns include the relative isolation of the park (gas, food and medical care are over 30 miles (48 km) away in Moab), lightning danger and unfenced cliffs . While nearby Moab is a noted center for mountain biking, bikes in the park are only allowed on paved roads. Hunting is not allowed in the park.

Here's the our members favorite photos of "State Parks in Utah". Upload your photo of Dead Horse Point State Park!

Going to Dead Horse Point State Park? Get answers from our friendly locals