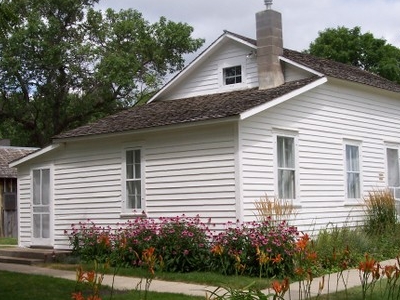 De Smet is a city in and the county seat of Kingsbury County, South Dakota, United States. The population was 1,089 at the 2010 census. According to the United States Census Bureau, the city has a total area of 1.16 square miles (3 km²), all of it land. De Smet has been assigned the ZIP code 57231 and the FIPS place code 16260.

Attractions:
Since 1971, De Smet has hosted a pageant, held over several weekends in July, to honor Laura Ingalls Wilder. Five of her classic Little House books were based on her experiences in and around the community. The story of how Charles Ingalls and his wife Caroline arrived in De Smet in 1879 by covered wagon from Walnut Grove, Minnesota, is told by a cast of thirty in an open-air theater near the old Ingalls homestead and the Surveyors' House.

Nearby are Silver Lake and the Big Slough, locations mentioned in her books. Reminders of De Smet's pioneer past are evident throughout the town, including the First Congregational Church, where the Ingallses worshipped. Laura, husband Almanzo Wilder, and daughter Rose left De Smet in 1894 to live on a farm in the Ozarks near Mansfield, Missouri. There Laura Ingalls chronicled her De Smet memories in such works as The Long Winter, Little Town on the Prairie, and These Happy Golden Years. Many residents in De Smet have made a special effort to learn the Ingalls story in hopes of assisting inquiring tourists each summer.

Here's the our members favorite photos of "Cities in South Dakota". Upload your photo of De Smet!

Going to De Smet? Get answers from our friendly locals