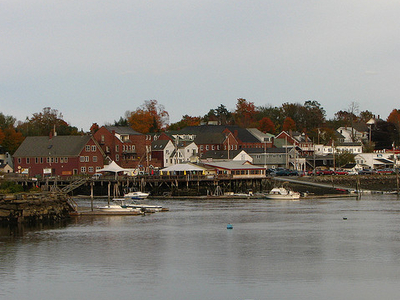 Damariscotta is a town in Lincoln County, Maine, United States. A popular tourist resort area, the towns of Damariscotta and Newcastle are linked by the Main Street bridge over the Damariscotta River, forming the "Twin Villages." The name Damariscotta is an Indian name meaning "river of little fish". The area was once inhabited by the Wawenock (or Walinakiak, meaning "People of the Bays") Abenaki Indians, who left behind 2,500-year-old oyster shell middens along the banks of the Damariscotta River. The Whaleback Shell Midden is now a state historic site. The land became part of the Pemaquid Patent, granted by the Plymouth Council in 1631 to Robert Aldsworth and Gyles Elbridge, merchants from Bristol, England. At Pemaquid (now Bristol), they built a fort and trading post.

Here's the our members favorite photos of "Towns & Villages in Bath". Upload your photo of Damariscotta!

Going to Damariscotta? Get answers from our friendly locals