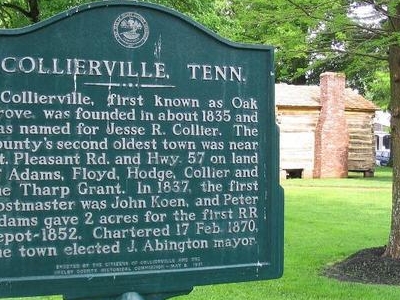 Collierville is a town in Shelby County, Tennessee, United States, and a suburb located in the Memphis metropolitan area. The town had a population of 43,965 at the 2010 census. Collierville is a mainly upscale town of large houses and considerable retail expansion, but unlike its neighbors, still retains much of its "old town" feel from its days as a self-contained community, rather than a suburb. Smaller, older houses are still found in the heart of Collierville, mainly between Byhalia Road and Collierville-Arlington on the east and west and Shelton and Highway 72 on the north and south. Some industry, notably Pepsi and Carrier, still dots the areas located south of Poplar Avenue.

Collierville is home to the Avenue at Carriage Crossing, an 800,000+ sq ft shopping center which opened in October 2005. Baptist Hospital, Collierville, serves the medical needs of the town's residents. Collierville will soon become part of the Interstate 69 highway plan integrating Bill Morris Parkway (TN 385) as part of this USDOT project linking Canada and Mexico with the United States.

Churches:
Collierville is home to many places of worship of various denominations. Among them are the Catholic Church of the Incarnation with nearly 4,500 members, and Collierville First Baptist Church with more than 3,200 members. Collierville is also home to numerous other Baptist churches, one United Methodist church, a few Presbyterian churches, and a few scattered Lutheran churches.

Education:
Of residents 25 years of age and older, 93.2% have a high school diploma or higher, 41.2% have a bachelor's degree or higher, and 11.4% have a graduate or professional degree. Of current students, 95.6% attend public schools, 4.4% attend private schools. Collierville is served by the Shelby County School District, which is accredited by the Southern Association of Colleges and Schools. Several private schools are also located in the town.

On August 2, 2012, voters in the town overwhelmingly passed an ordinance establishing a separate school district for the town starting the 2013-2014 school year. It passed 10,615 (87%) to 1,519 (13%). An ongoing federal case, filed by the Shelby County Board of Education, alleging that the state law allowing for the establishment of the school district is unconstitutional, and the judge, Samuel "Hardy" Mays, can invalidate the referendum, thereby stopping the school district's establishment.

Here's the our members favorite photos of "Towns & Villages in Memphis". Upload your photo of Collierville!

Going to Collierville? Get answers from our friendly locals