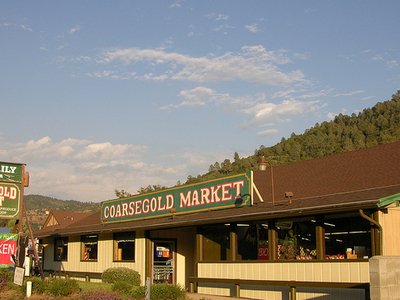 Coarsegold is a census-designated place in Madera County, California. It is located 8 miles (13 km) south-southwest of Yosemite Forks. The population was 1,840 at the 2010 census.

Coarsegold has previously had several names, including Coarse Gold, Gold Gulch, Michaels, Oro Grosso, Texas Flat, and Coarse Gold Gulch. The place was first called Texas Flat after miners from Texas discovered gold there in 1849. By 1874, the name had changed to Michaels, honoring Charles Michaels, a local merchant. A rival mining camp inhabited by Mexicans there was called Oro Grosso. The current name derives from the California Gold Rush of the mid-19th century, when prospectors discovered coarse lumps of gold in a nearby creek. At one time, several dozen gold mines operated in the area. The Coarse Gold Gulch post office opened in 1878, changed the name to Goldgulch in 1895 and to Coarsegold in 1899.

Culture
The Coarsegold Historic Village is located on Highway 41 between Fresno and the southern entrance to Yosemite National Park at an altitude of approximately 2,000 feet (610 m). It is a very small town but does boast a few amenities such as a post office, a supermarket, hardware store, bank, florist, a few restaurants and tourist shops.Nearby towns include Oakhurst, around 7 miles (11 km) away.

Every year from mid-October to mid-November, tarantula mating season takes place and the town is full of tarantulas. Locals go out of their way to protect and respect the arachnids during this time. In late October, there is a Coarsegold Tarantula Festival, now in its 14th year, which includes tarantula racing, a competition for the hairiest legs of both men and women, and a pumpkin dessert contest. It is traditionally held the Saturday before Halloweeen.

Here's the our members favorite photos of "Towns & Villages in Yosemite National Park". Upload your photo of Coarsegold!

Going to Coarsegold? Get answers from our friendly locals