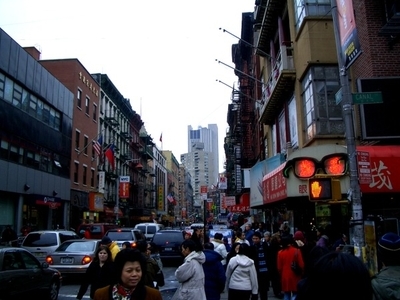 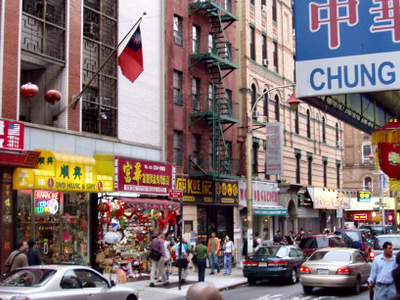 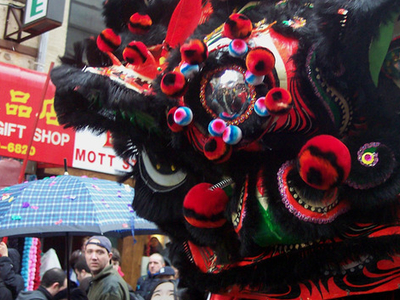 Chinatown, Manhattan (simplified Chinese: 纽约华埠; traditional Chinese: 紐約華埠; pinyin: Niŭyuē Huá Bù) is home to the largest enclave of Chinese people in the Western Hemisphere. Its location is in the borough of Manhattan in New York City, USA, bordering Lower East Side to its east and Little Italy to its north.

With an estimated population of 90,000 to 100,000 people, Manhattan's Chinatown is also one of the oldest ethnic Chinese enclaves outside of Asia, with most of its residents now Mandarin, Min, or Cantonese-speaking and originating from various regions of China. It is one of six Chinatown neighborhoods in New York City and eight in the New York City Metropolitan Area, which contains the largest ethnic Chinese population outside of Asia, enumerating an estimated 735,000 individuals; the remaining Chinatowns are located in the boroughs of Queens (two or three, depending upon definition) and Brooklyn (three) and in Nassau County, all on Long Island in New York State, as well as in Edison, New Jersey. In addition, Manhattan's Little Fuzhou (小福州, 紐約華埠), an enclave populated primarily by more recent Chinese immigrants from the Fujian Province of China, is technically considered a part of Manhattan's Chinatown, albeit now developing a separate identity of its own.

A new and rapidly growing Chinese community is now forming in East Harlem (東哈萊姆), Uptown Manhattan, nearly tripling in population between the years 2000 and 2010, according to U.S. Census figures. This neighborhood has been described as the precursor to a new satellite Chinatown within Manhattan itself, which upon acknowledged formation would represent the second Chinatown neighborhood in Manhattan, the eighth Chinatown in New York City, and the tenth within the overall New York City metropolitan region.

Landmarks:
For much of Chinatown's history, there were few unique architectural features to announce to visitors that they had arrived in the neighborhood (other than the language of the shop signs). In 1962, at Chatham Square the Lieutenant Benjamin Ralph Kimlau Memorial archway was erected in memorial of the Chinese-Americans who died in World War II. This memorial, which bears calligraphy by the great Yu Youren 于右任 (1879-1964), is mostly ignored by the residents due to its poor location on a busy car thoroughfare with little pedestrian traffic. A statue of Lin Zexu (林則徐), also known as Commissioner Lin, a Foochowese Chinese official who opposed the opium trade, is also located at the square; it faces uptown along East Broadway, now home to the bustling Fuzhou neighborhood and known locally as Fuzhou Street (Fúzhóu jiē 福州街). In the 1970s, New York Telephone, then the local phone company started capping the street phone booths with pagoda-like decorations. In 1976, the statue of Confucius in front of Confucius Plaza became a common meeting place. In the 1980s, banks which opened new branches and others which were renovating started to use Chinese traditional styles for their building facades. The Church Of The Transfiguration, a national historic site built in 1815, stands off Mott Street. In 2010, Chinatown and Little Italy were listed in a single historic district on the National Register of Historic Places.

Here's the our members favorite photos of "Neighborhoods near Manhattan". Upload your photo of Chinatown!

Going to Chinatown? Get answers from our friendly locals