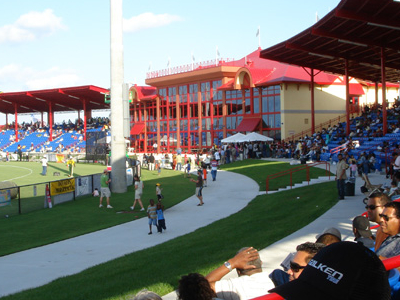 Central Broward Regional Park is a large municipal park in Lauderhill, Florida, owned and operated by Broward County. It opened on November 9, 2007, at a construction cost of $70 million. It is located at the corner of US 441 and Sunrise Blvd. (SR 838)

The first organized cricket event held there was a Twenty20 cricket tournament, the Martin Luther King Twenty20 Cricket Tournament (MLK T20), on January 18-20, 2008. The event featured local players from India, Pakistan and the West Indies. The first international tournament hosted was another Twenty20 tournament, the MAQ T20 International Cricket Tournament, on May 23-25, 2008. That event featured teams from Canada, Pakistan, the West Indies, and the rest of the World, including former superstars such as Javed Miandad, Richie Richardson, and Mohammed Azharuddin.

The park hosted the first top-tier international cricket competition on American soil, a two-match Twenty20 series between New Zealand and Sri Lanka, from May 22, 2010. The series was drawn 1-1, and despite it being a low-scoring affair, the healthy and supportive crowd, as well as the fine-quality facilities (allowing for the exception of substandard lighting, which resulted in the cancellation of an originally scheduled night match), gave promise of more international cricket being played at the park's stadium in the future.

Other Amenities :
Central Broward Regional Park also has two large artificial-turf practice fields. They can be split into four American football or soccer pitches, or combined into two cricket pitches. It also features standard playgrounds, a 1.5-mile walking trail, and basketball, netball and tennis courts. A water park—Tropical Splash—opened in March 2008. The park is also home to the MLS combine, the future stars of Major League Soccer since its inception in 2011.

Here's the our members favorite photos of "Stadiums in Miami". Upload your photo of Central Broward Regional Park!

Going to Central Broward Regional Park? Get answers from our friendly locals